For the next installment in my my interview series featuring my favorite alternate cartagraphers, I got a chance to talk with Rvbomally of AlternateHistory.com. He is the author of "Ad Astra Per Aspera", but I wanted to talk to him primarily for his map work. Check out what he had to say below:

Just some random guy on the Internet.

I was first introduced to the concept by the Dawn of Victory mod. At that point, I was far more interested in conventional science fiction, so the WWII powers in space was a new concept that really got me interested in the genre. I then found out about Timeline-191, which I then picked up and fell in love with. And the rest, they say, is history.

What inspired you to write "Ad Astra Per Aspera"?

No one thing inspired me to write AAPA, although Fallout, 1984, and Warhammer 40K are clear influences. AAPA is, in a way, the final evolution of my science fiction musings dating back to at least 2006. The setting back then was far different, involving space Texans attacking robots on Mars, of all things. It gradually evolved into a more conventional space opera, where the primary civilization was the Holy Dominion of Christendom, a galaxy-spanning theocratic empire that enslaves any aliens it encounters, at war with a communist insurgency.

When I found out about Warhammer 40K, I decided to do something different, so I decided to make a space Cold War story, while retaining some elements of the original "Dominionverse" story. The Dominion became the Coalition of Western Republics, which was pitted against a Sino-Soviet Collective that later became the Conseil. The Technocracies were added later as a neutral kingmaker. You could see some of this evolution in early draft maps I have since posted to my deviantArt account, and I plan on revisiting the first two incarnations of AAPA in a remake.

A long time ago! I'd say about 2008, possibly even earlier. Those initial maps were utter garbage; nonsensical recolors of the Wikipedia basemap. Of course, I got better.

What do you think people like about alternate history maps?

For me, it shows a radically different world at a glance. When I see different borders, and different alliances on a key, I start thinking about how different that world's history, culture, and politics must be from our own. It's a very efficient and very effective form of telling a worldbuilding-heavy story.

What software do you use to create maps?

For my oneshots, a combination of Adobe Photoshop and Microsoft Paint. Photoshop isn't strictly necessary for the process, it just makes things like adding lots of text, choosing colors and outlining countries easier. All of my oneshots can be replicated on Paint alone. When I decide to get fancy, I use Adobe Photoshop and Adobe Illustrator.

What is your favorite map that you ever created? 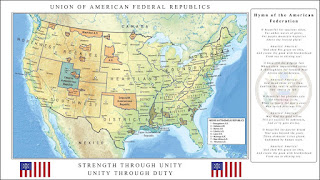 That's a tough one. I tend to adopt a favorite and then drop it. For example, right now I'm a big fan of my cover of Transparent Blue's "Last Living Souls". But my all time favorite would have to be my Union of American Federal Republics map. I love how it turned out!

[Editor's Note: And it was featured on Map Monday.]

Nowhere, unfortunately. I'm typically a busy guy, with only enough time to make maps for myself. I'm trying to get through a large list of maps I'd like to make at the moment. I'm still making maps for ideas I had back in 2013. If you like what you see, however, feel to give me a tip on patreon.

Aside from my Oneshot Scenarios, I'm working on "Space Cadet", another science fiction setting which is my attempt to take just about every genre of science fiction at once and stick it in a blender.

These days, nothing but boring textbooks and legal codes, unfortunately.

The best way to learn is by trying to imitate maps you like. Most of my progress has been made trying to replicate an aesthetic I see on a map thread, or even on a map in real life. I find that I never replicate the aesthetic perfectly, but I learn a lot in the process, and it helps me develop my own style. Oh, and tutorials are helpful.
Posted by Mitro at 11:00 AM