I was staring down a ton of tedious linking, mostly because of BBC's adaptation Jonathan Strange & Mr. Norrell, and I thought "screw this". I didn't set out to be a writer just to spend my day creating long list of links that can take hours to complete.

So say goodbye to the Links to the Multiverse section because this will be the last time you see it. I remember holding a poll a while back and people voted in favor of it, but I need to make an executive decision regarding the future of The Update. Does that mean I won't be sharing all the alternate history posts from the week? No, of course not. Instead of linking it to the Weekly Update post, however, I am going to be sharing them as I find them directly on Facebook and Twitter. So if you don't follow me on those sites, now is the time to do it.

So what does this mean for the Weekly Updates? How will I decide to what to write about if I am not collecting and categorizing articles and posts in my usual manner? Well that is the beauty of my new plan. YOU will decide what the subject(s) of the Weekly Update will be on Monday. After the week is over I will look through the posts on social media that got the most likes, comments, shares, replies, favorites, retweets, etc. and summarize them here on the blog and give my opinion (because everyone obviously loves to hear that). I may even apply the same formula to other long-running segments, like Map Mondays and Videos for Alternate Historians.

Does that all make sense? If not, don't worry, I will iron out the kinks as I get used to the new procedure. Hopefully this will make Weekly Updates easier to write and more fun for you all to read. 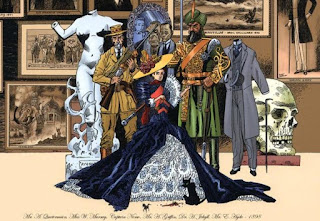 LXG sucked. It was the worst adaptation of an Alan Moore comic and it caused Sean Connery to quit acting. Nevertheless, it still made a lot of money, so that is probably why Fox decided to go ahead and reboot the franchise. According to Variety, John Davis (The Blacklist) will produce, Jayson Rothwell will write the script and Ira Napoliello and Matt Reilly are overseeing (whatever that means) the remake/reboot.

I sort of agree with Katharine Trendacosta of io9 reaction to this news. Since the original film was so bad, there really is no where to go but up for this reboot. Considering as well the high quality films and TV we have seen in the last couple years, audiences are demanding better content from the big studios. Whether they will actually create something that is watchable remains to be seen, but I am cautiously optimistic.

5 Great Steampunk Writings that Aren't Actually Steampunk at Pornokitsch.
6 Absolutely Magical Alternate Histories at B&N.
How Mowery (The Parallel Lives of Elizabeth Ann) Found Herself in Fantasy Land at SF Signal.
Review: At the Ruin of the World by John Henry Clay at Falcata Times.
Review: SS-GB by Len Deighton at Past Offences.
Why The Most Powerful Time Travel Stories Aren’t About Changing The Past at io9.

If Africa, Asia, and Europe Declared War on the U.S., Who Would Win? at Slate.
Forays into “What If” History: An After Action Report at American Historical Association.
This OS Almost Made Apple an Entirely Different Company at Wired.
Scotland Yard Feared Trekkies And Sci-Fi Fans In The Late 90s at ScienceFiction.com.
U.S. Army's New Battle Blimp Takes Flight at Popular Mechanics.
A White House without dogs? An alternate history of presidents minus the pups at Yahoo.
Why We'd Be Better Off if Napoleon Never Lost at Waterloo at Smithsonian.

The Line it is Drawn #242 – Golden Age Versions of Modern Superheroes! at CBR.