Review: "Clopton's Short History of the Confederate States of America 1861-1925" by Carole Scott 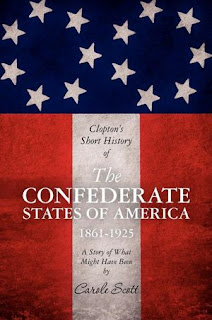 My favorite history professor once said that every historian's bias is apparent in their writing.  This bias is usually shaped by the culture they grew up in, among other factors.  Thus an American from one of the northern states might write a history of the American Civil War and end up demonizing the Confederacy, even if he had no intent whatsoever to do so when he started writing.  Bias is often written into works unintentionally and even a good author has difficulty finding and removing it.  What if that historian, however, came from the Confederate States of America?

Clopton's History of the Confederate States of America, 1861 - 1925 by Carole Elizabeth Scott is a textbook alternate history written by a fictional Confederate historian and an alternate version of Scott in a world where the Confederacy won the American Civil War (or Second Revolutionary War as it is called in this ATL).  Major changes included the early death of president-elect Lincoln and Howell Cobb becoming President of the CSA.

This book provided an excellent example of how history professors have biases that can shape how the history is presented. The story successfully demonstrates the likely difference between how a victorious Confederate historian would have viewed events and the Confederate practice of slavery. At times I found myself wanting to go on the Internet and attack the fictional Clopton's theories on slavery.  If slavery was preferable to wage labor in the North, why did the South need a Fugitive Slave Act?  I had to stop myself, however, and remember the point of the novel.  Clopton is biased and to truly grasp the history of this alternate Confederacy you have to read between the lines.

I wish I could have given this novel a better review, but there were some major flaws that prevented me.  First, there were the usual grammar-errors found in self-published works, including a weird habit of using periods when commas were appropriate (and vice-versa).  Then there is the fact that you can only get Clopton's Short History in paperback form.  That might not be so bad, unless you consider the actual amount of allohistorical content available.  Close to half of the book is made up of short OTL bios of the many historical persons mentioned throughout the novel.  In an age where I have access to vast amount of historical data from my cell phone, having such a large appendix of OTL information is unnecessary.

Clopton's Short History is a well research and written novel of the Confederacy that has a unique take on the genre.  I still recommend the novel, despite some of its flaws, though I hope to see it in e-book form soon.