The Almost Certain Victory: A Strategic Analysis of World War One 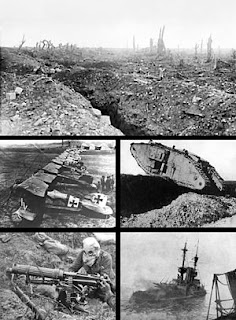 The Great War, as it has been often called, has not been a great stamping ground for alternate history. To some extent, the popular perception of the war – essentially as a bloody pointless slaughter – has helped; it seems unlikely that much can actually change in the war itself. German victory timelines either involve a rapid defeat of France…or a victory in 1918, during the Kaiser’s Battle. People trying to criticize the conduct of the First World War have somehow to explain away the fact that the Allies actually won, shock, horror!

Why might this be so? The first problem facing Germany lay in its strategic situation. The major powers that took part in the war were Britain, France, Germany, Austria-Hungary, Italy, Russia, Japan, America and Turkey. As it worked out, the Allies were Britain, France, America, Russia, Italy and Japan, opposing the Central Powers, which were Germany, Austria-Hungary and Turkey. This statement is actually somewhat misleading; America and Japan were either expected to remain out of the war or too far away to interfere properly. Italy, in fact, was expected to fight on the other side of the war; in any case, it didn’t really add enough to either side to tip the balance.

Overall, this meant that Britain, France and Russia faced Germany, Austria-Hungary and Turkey, once Turkey entered the war. This meant that the balance of naval power lay squarely with the Allies; even if the Germans sought a battle at once, rather than the half-hearted affair of Jutland, they were quite likely to lose. Even a victory, assuming the Germans risked the encounter, would be so costly as not to change the situation at all; an invasion of Britain would be a risky pipedream. This has a second implication – the battles outside Europe were of no importance to the conduct of the war!

It matters very little if the Japanese overrun Tisngtao or not; the Germans will either regain it in a peace settlement, or lose it if they lose the war. The same goes for the German islands in the Pacific, although it will have major implications for post-war development; the outcome there and in Africa simply cannot affect the outcome of the war. Assuming a level of German success – add in Boer factions, native revolts, etc – that borders on the fantastic, it cannot serve as anything more than a diversion from the western-eastern front. The main battle of the war will be fought out there.

Turkey, of course, remains something of a wild card; a minor change during the early days of the war and Turkey may remain outside the fighting altogether, giving the Ottoman Empire a longer lease on life. However, even with the Geoben remaining away from Turkey, the British seizure of the Turkish superdreadnaughts, symbols of national pride, may well guarantee that Turkey enters the war. Regardless, it doesn’t matter; Turkey lacks the fighting power to influence events on the European battlefield. The division of spoils, post-war, will be determined whatever happens in Turkey.

So, on to the western and eastern fronts. Germany faced France and Russia, backed up only by Austria-Hungary and a handful of smaller states, none of which can contribute more than local power to the fight. Serbia’s defiance will remain as irrelevant as it always was to the main struggle; the man who believed himself responsible for the war will never be able to influence the outcome. The important contest is France V. Germany and Germany and Austria-Hungary V. Russia.

The Germans claimed to have the most powerful army in the world. Recent attempts by revisionist historians have claimed that the army not only had weaknesses, but the BEF – a small professional army – was its superior. Certainly the BEF stood up well during the early months of the fighting, but it’s main limitation was in numbers…and the Germans had far more divisions ready and raring to go. Although the Germans enjoyed the advantage of interior lines, they lacked the luxury of fighting on one front, something that the Allies would almost always enjoy. So…

1914 – the Germans launch their attack, marching through Belgium into France. Unfortunately, the German Army, while powerful, simply lacks the capability to pull off an offensive that moves fast enough to crush the French Army. The Germans have the added – and unexpected – disadvantage of the Russians moving quicker than they thought possible; the Russian army knifed into the German rear within weeks of the war starting. The Russians, of course, could not bring off a blitzkrieg either…but the stalemate ensured that neither side could win quickly. Any timeline would have to remove the BEF, damage the Russians, or something unexpected to produce a quick German victory. Even if everything goes perfectly for the Germans, they will not be able to destroy France in the first year.

People, who state that the French are nothing more than cheese eating surrender monkeys, must note that this is 1914. The problems with the French army did not begin to crack open until later – 1916 – after several futile attempts to throw the Germans out of France. The French had plenty of fight in them – and, as the reports show, a modern army could hold a defence line against the Germans. In short, the Germans had to win quickly, or spend years trying to bleed out the French. As it happened, by the time the French were starting to become exhausted, the British army had reached a strength that could hold the line – and, in 1917-18, take the offensive.

The situation was different in the case of the Eastern Front. As noted above, the Russians had actually managed to surprise the Germans – who sent some divisions from the west to the east during the opening weeks of the war – by hitting them in the rear sooner than they had believed possible. Once the war had settled down, however, the Germans needed to destroy the Russian army, which had plenty of ground to retreat into. By the time the Russians were finally destroyed, more through their own internal problems than the German attack, it was too late to give the Germans a chance to do more than catch their breath – they needed the divisions released on the western front.

The circumstances that brought America into the war were so unexpected that it is easy to imagine a POD that removes them, leaving America out of the war. Despite that, at that point the British – and, to a lesser extent – the French, have actually managed to build an army that can defeat the Germans; the Kaiser’s Battle gave the Allies a few nasty moments, but – again – the Germans lacked the capability to defeat the Allies in a field battle. The absence of an American Army will certainly have effects on the political outcome of the war – absent Wilson’s naivety, more real politic will prevail – but it will not prevent the Allies from crunching their way to the Battle of the Hindenburg Line and placing the Germans in a losing position. It is possible to extend the war into 1919, but it is unlikely that the Germans can produce more than a local victory.

Finally, the peace; France was determined to regain its lost territories. Britain had a strong interest in the German colonies. Japan, also, had such an interest. That Germany would be stripped of all such possessions was inevitable; their final disposition – mandates, straight land grabs, whatever – hardly matters to the text of this essay. Germany simply lacked the capability to win the war before being ground down out of existence. The only question was how long it would take for the Allies to win.

Dale Cozort once compared history to a region filled with floodplains and valleys. The ending of world war one was a floodplain, with dozens of possible changes, and to some extent so was the beginning. The course of the war, however, remains a valley; barring some unforeseen development, such as the development of tanks or the collapse of allied will to win, Germany must lose the war.


* * *
Chris Nuttall blogs at The Chrishanger. His books can be found on Amazon Kindle.
Posted by ahwupdate at 11:00 AM