I love maps when there is an alternate colonization of the east coast of North America. The most recent find of its kind has to be "Carolina and Friends 1800" by Map Monday veteran Rebecca Stirling: 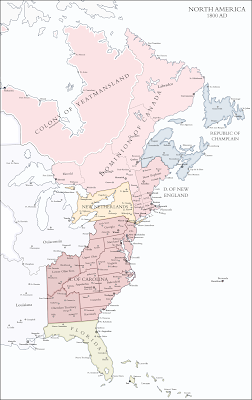 Wow, that is a long map once you put it in blog form. Anywho, this is a map from Rebecca's "The Faraway Kingdom", which I admit I haven't read, but it appears to involve the Stuarts founding a kingdom-in-exile in North America. So I am definitely going to have to check it out because I love Stuart-oriented timelines like that.

The map itself is a well-done balkanized North America. I especially like how Rebecca doesn't use dark blues for the ocean. Its a nice touch that you see again and again in her maps that I don't think I have commented on yet. Plus it has plenty of details without being too busy.

I am little curious about why Pennsylvania is called Georgia in this timeline. I'm pretty sure Georgia in our timeline was named after the Hannoverian King George II, but why would the Stuarts name one of their provinces after those who replaced them? I don't know, maybe its explained in the timeline itself.

Honorable mentions this week go out to "Gauls Shank Rome" by Bruce Munro and the "Sovereign Republic of Nubia" by Aven.