Review: War of the Worlds: Goliath 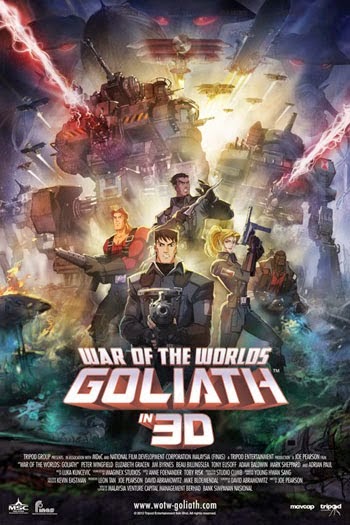 It’s been a while hasn't it? I apologize for the prolonged absence from the site folks, and hopefully, this will be the first of many more posts to come, but for today, I can think of nothing better to kick off my return than finally looking back at a movie I first talked about on this site back in 2012, War of the Worlds: Goliath.

First making waves back in 2012 in the Alternate History community, the movie was envisioned as a sequel to the events of HG Wells famous novel, where an Earth ravaged by the first Martian invasion digs in and fights back against the long awaited second attempt from the red planet to conquer our blue one. It’s easy to see why it made waves given some of the cult names behind the movie, to say nothing of the fact it surfaced around the same time as the release of another oddball independent AH-infused sci-fi extravaganza, Iron Sky.

Plus, it has President Roosevelt killing Martians with a laser cannon – that alone would be worth seeing.

That said, getting news on the development, or even the release date has always been somewhat tricky following the initial splash. Though it premiered in 2012, and was given a VERY limited release in the United States earlier this year, I haven’t yet heard much about the movie itself, much less even had the chance to see it myself. That is, until I chanced upon the movie on Netflix, and finally sat down to see if it could live up to the promise War of the Worlds: Goliath once showed.

In 1899, invaders from Mars attacked the Earth, easily beating back any and all resistance from the planet’s human inhabitants, the invasion failing only because of a lucky strike from earthly germs ravaging the Martians. Fifteen years later, they’re attempting to invade once more, but they will find a humanity far better armed and prepared this time. On the front lines is an international coalition dubbed A.R.E.S., created to both form a global defense force and reverse engineer Martian technology, they are now humanity’s best hope for once more driving the aliens from our home world – if they can put aside nationalism and fighting with each other long enough to fight for humanity that is.

I won’t even try to say otherwise, but if being a sequel to War of the Worlds wasn't your first clue, War of the Worlds: Goliath is a very silly movie, in all of the best of ways. Story wise, the movie is an above average Humanity-comes-together-to-kick-alien-arse movie ala Pacific Rim or Independence Day, and a few original touches aside, chooses to instead play on nearly every genre trope in the books, and I fully expect the degree of how much you enjoy this movie to be if you think that’s a good thing or a bad thing.

A good example would be our main protagonists, a typical five-man band where the closest thing to character development is an Irish member questioning whether an independent Ireland or humanity as a whole deserves the greater part of his loyalty. By the end of the movie, you might not even remember their names, yet the movie goes at a brisk enough pace that it never bothers you. Of course, part of that may be the movie has a few historical cameos whose appearances typically mark a high moment of the film, usually because they show up long enough to deliver one of the movie’s crowning moments of awesome. In case you’re curious, yes, mimetic badass President Roosevelt is everything you’d want and more.

From an animation and production standpoint, War of the Worlds: Goliath is a treasure trove, and very clearly a labor of love for the creators. Aside from a few moments where the animation looks jolty, something that should be expected given it’s a low budget independent animated film, from an animation standpoint War of the Worlds: Goliath is amazing, with the style best described as anime-inspired dieselpunk, as if Sunrise did a series based on Sky Captain and the World of Tomorrow. The designs of the cities and military gear are always intimately detailed, and using CGI to animate the Martian tripods makes for an interesting stylistic contrast that highlights their alien nature.

War of the Worlds: Goliath may not be anything too out of this world, but it’s a fun little slice of cheesy goodness that more than overcomes any lack of ambition or originality. I’d compare the feel of the movie to one of the better cartoons from the 80s, like GI Joe or The Centurions, and for anyone who appreciates their charms, War of the Worlds: Goliath is worth watching.

A good litmus test to consider with War of the Worlds: Goliath is to ask if you’re the kind of person who wants an original story, developed characters, and cutting edge effects, or if you’re the kind of person who gets a big goofy grin on your face at the idea of the Red Baron dogfighting Martian spacecraft attacking a zeppelin while humming the Ride of the Valkyries. If you’re the former, you may lament that with a more developed script and story this could have been truly fantastic. If you’re the latter, strap yourself in for a top-notch B-movie and try to contain yourself when Teddy Roosevelt singlehandedly takes on a Martian air squadron.

While it may not be everyone’s cup of tea, I enjoyed War of the Worlds: Goliath myself [Editor's Note: as did I.], and fully expect it to become a cult classic within certain circles in good order. That said, even if it doesn't sound like your type of movie, given it’s just barely over an hour long and free to stream on Netflix, I recommend you give it a chance sometime.

Soldier, scholar, writer and web-voyeur, Sean CW Korsgaard has been active in the alternate history community since 2006. In addition to his contributions at the Alternate History Weekly Update, he writes for several websites, including his own, which can be found here.
Posted by Mitro at 11:00 AM