Well dear readers, October is coming to a close, and with it, our profiles of some of the more terrifying worlds of alternate history. Since tonight is Halloween, I decided to send of this segment with a bang, finishing it with a profile of the most chilling alternate history I've ever read, DValdron's Green Antarctica.

Antarctica is, without a doubt, the most hostile place on the planet to life. The combination of hostile weather and terrain, maddening isolation and inability to support nearly all life has made it as hellish a place as any on earth, a fact masters of horror from H.P. Lovecraft to John Carpenter have been using to it's fullest capabilities. So it should surprise you that making the continent more hospitable actually allows for a more hellish place.

Which is where we have our POD, that for some reason or another, Antarctica never glaciates. While this is generally hand-waved, the research and detail given to the sort of ecosystem that would arise in a (mostly) unfrozen in Antarctica is admirable extensive, and is one of the most well-handled I have ever seen. The plants and animals are detailed and unique, with most based on OTL prehistoric creatures from Australia and South America, only further evolved to help them adapt to life in the still hostile Antarctic. The result is native life that includes fire-breathing ants, crocodile-esque giant platypus', acid-spitting teratorns, hive monkeys, and countless other creatures that could very well form the core of a zoo of nightmares. 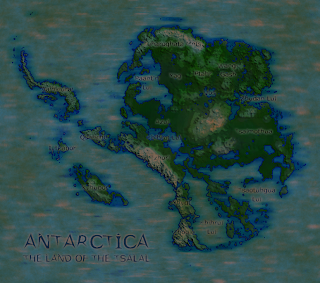 Of course, even the horrors of the wildlife pale in comparison to the human inhabitants, who call themselves the Tsalal. The Tsalal start small, with just two breeding couples of shipwrecked Australian Aborigines forming the beginning of their entire race. Their descendants make for themselves a society on this hostile Continent, going to extremes to secure their civilization, including the early harnessing of coal for warmth, building entire cities underground, and domesticating the hive monkeys to harvest what little crops they can grow (as well as raising a less-hairy variety as - brace yourselves - concubines). A set of values utterly alien to any other place on Earth is formed, were incest, cannibalism, murder, and countless other sacred cows are slaughtered (and usually raped), with such twisted acts viewed as an accepted part of life.

It is from Tsalal society and history that much of the terror of the timeline is drawn. A fair portion is drawn from the the obvious disturbing depravities embraced by the various Tsalal societies. These include the previously mentioned sexual deviancy, having delicacies that include penguin vomit and long pig, a scientific approach to torture (which is viewed as entertainment in most of their societies), and having a legendary hero known by the honorific 'the child-raper'. The result is an utterly alien culture that remains all too frighteningly real. The Tsalal, while depraved, are not savage, but rather a dark mirror of all we consider civilized.

Thankfully, due to a butterfly net, the Tsalal remain isolated from the rest of the world, at least until Captain Cook stumbles upon their civilization, with tragic results. While the timeline has yet to be fully fleshed out to this era, from what snippets have been dropped, we know Argentina has been mostly overrun, various invasive Antarctic wildlife are posing problems in parts of the world, and luck of the Irish carries and entirely new meaning. Also, fittingly for an utterly Lovecraftian work like this, journalist Howard Phillips serves as one of the worlds foremost experts on Tsalal society and culture, having traveled to Antarctica several times, and bringing back a grisly souvenir that would be right at home in the hands of an Elder God.

DValdron warns the reader at the begining of the timeline that if this went as he planned, that by the end the reader would be 'sleep with the lights on, chug gravol for a week and every day google Antarctica just to make sure you're in the timeline where its under two miles of ice', and I gotta say, he was not kidding. The world and Antarctic civilizations he has created are pure and utter nightmare fuel, and it is nearly impossible not to cringe or shudder at not just the details of Tsalal society, but the terrifying fact that he has made such a society possible and plausible. It's well written, well researched, and so madeningly demented at times H.P. Lovecraft would be proud. If you feel brave, and don't mind a chill or two, you can read this horror here, and just keep telling yourself dear readers - it's only alternate history.

Soldier, scholar, writer and web-voyeur, Sean CW Korsgaard has been active in the alternate history community since 2006, and was recently elected to succeed Mitro as President of the Alternate History Online Facebook group. In addition to his contributions at the Alternate History Weekly Update, he writes for several websites, including his own, which can be found here.
Posted by Korsgaard at 9:46 PM