One Way to Divide Canada: Ethnicity

Around three years ago, Sir Matt Mitrovich himself promised “more maps on the balkanized North America trope”. But of course, the post this came from only covered the US. The post was about dividing the United States up by ethnicity, and I wondered what would happen to Canada (and Mexico) if the same thing happened to them. Seven months later, I saw a map of Canadian ethnicities and I remembered this. Of course, it would be a hard task, so I did it in one night and didn’t think about it again. The original map I used was this one, on DeviantArt: 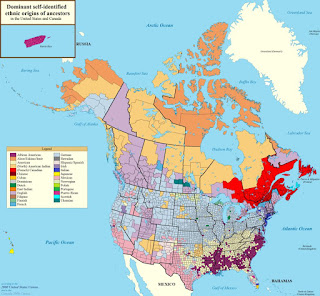 This map covers the largest ethnic group of each county, but it doesn’t mean it has the majority in the region. For most Canadians of German ethnicity, their families came over to the Americas much earlier than other colonists. For the rest of Canada, it’s mostly either English or Native Americas. This is because immigration wasn’t a major source of income and population for Canada, compared to the US’ vast melting pot of immigrants and ethnicities. Most of the European population came out of colonization, which wasn’t even too strong in itself.

The native lands are sparsely populated, even though they cover a lot of land. The Northwest Territories, about the size of the Confederate States of America, only has 20,000 people. The Ungava region of Quebec, known for its curious lack of French folk, only has around 15,000. The only time that English overran these regions was during the Yukon Gold Rush, when miners came to the north in thousands. If it wasn’t so cold, then the Canadian government would probably have been able to spread the European settlements farther north. Using the map above, I decided to make a map of the countries that would come out of dividing Canada up by ethnicities. This is what I created: 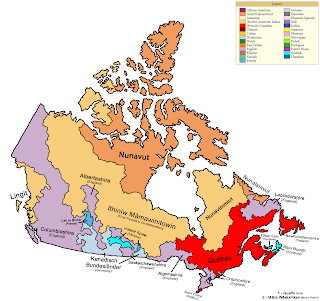 Crazy, right? I mean, it’s not complete border gore. Well, maybe. It’d be pretty hard to have happen, no matter what the point of divergence. There are probably ways to have something like this happen, maybe to some degree. Instead of independent nations, they could all be provinces of some sort of a crazy Canadian Federation. Perhaps, in this TL, Canada became communist, devolving the former provinces to be based on ethnicity. Or, maybe colonial Canada had a more open government, forcing more immigration and then giving them autonomy. Maybe this world is a dystopia, with a The Man in the High Castle-type thing going on. Perhaps Nazis divided up Canada with the intention of showing the US who’s boss. Who knows? There’s a lot of stupid reasons as to why it could happen, but the truth is there’s no plausible way for it to happen.

While this map probably wouldn’t be possible, there are still many popular secessionist groups in Canada. For example, the Republic of Madawaska was a de-facto independent state for years, until it was reabsorbed into New Brunswick. The referendums in Quebec also demonstrate this and the fact that they so narrowly came close to succeeding proves that the premise of this map is slightly possible. Even so, secessionist movements sadly don’t align to be this way, making the map as invalid and implausible as nearly all the other balkanized Canada maps. If you have any more maps of a Balkanized America, makes sure to send them to Matt at ahwupdate at gmail dot com. Thanks for reading this, and have a great day!