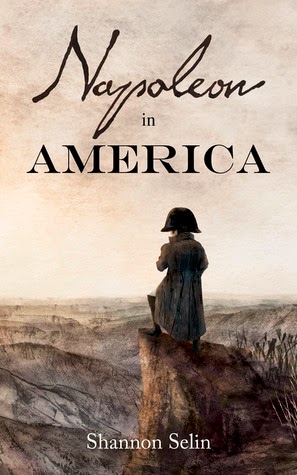 What if Napoleon's epilogue wasn't set on St. Helena, but instead in America? That is the question asked in Shannon Selin's new novel Napoleon in America.

In 1821, Napoleon is rescued again from exile by the pirate Jean Lafitte. After a brief stay in New Orleans to recover from an illness, he decides to travel around America on a scientific expedition. Meanwhile, people everywhere are speculating on what he will do next. The Holy Alliance fears he will try again to conquer Europe. French revolutionaries believe he is only moments away from returning to their shores to overthrow the Bourbons. The Emperor of Austria believes he may try to reunite with his son, Napoleon II, and place him on the throne of France. The Americans just hope he will live a quiet life like his brother Joseph Bonaparte and not stir up trouble.

It becomes quite clear, however, that Napoleon has no intention of living a peaceful life in America. Unhappy with the Americans for their incessant interest in making money, he tries for one last grand campaign. Building an army of French expatriates and American adventurers, he leads a filibustering expedition into Texas to establish a new French colony.

Napoleon in America is a well researched alternate history, without any alien space bats. It had a large caste of historical characters without, as far as I can tell, many fictional characters to crowd them out. Indeed I was happy to learn that Napoleon himself was a fast eater, a trait that I share with him. I also enjoyed Selin's use of newspaper clipping and letters written in the parlance of the time that helped give the reader an idea of the state of the world. I would be remiss if I did not mention that the cover art won an award recently.

The book, however, did have some weaknesses. Selin uses an old fashioned writing style, with a lot of tell and not enough show. This isn't a bad thing since it read as if she was emulating other works of fiction written during the same time period. Nevertheless, the amount of background information, which I still applaud as a sign of a well-researched alternate history, probably could have been parred down in some parts of the book. I also wanted more details on exactly how Napoleon escaped this time as it was presented as a fait accompli and thus I felt I missed out on a potentially interesting action scene.

I still enjoyed Napoleon in America and recommend it to all except for the casual alternate historian. The writing style and wealth of information might scare off some people, but I think others may enjoy what happens when the le petit caporal arrives in the New World.