Map Monday: The Pacific Republic of Cascadia, 2013 by Canyonjumper

I've been looking for new places to find alternate history maps besides AlternateHistory.com and Reddit has proven to be a good source, especially /r/ImaginaryMaps/. One of the maps I shared from there last week was The Pacific Republic of Cascadia, 2013 by Canyonjumper: 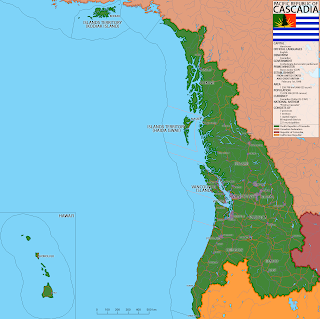 There isn't a full scenario that goes with this map, but looking at the what Conyonjumper said in the comments, the point of divergence (POD) is somewhere in the early 19th century after Napoleon's empire lasts slightly longer and because of this the British government isn't interested in developing the west due to the conflicts in Europe. This leads to the people of the Columbia District/Oregon Country deciding to declare independence rather than join the United States and/or Canada. Afterwards the capital of Cascadia is moved around a lot, the United States fell apart into separate states (Columbia and California being shown in this map), Canada also fell apart but got back together again as a Federation and Hawaii still has a monarchy although they are a part of Cascadia. Canyonjumper's DeviantArt page also features other Cascadias, but some of the info on them contradicts his comments on Reddit, suggesting his timeline has been revised multiple times.

While the map is well done, I'm not sold on the story. While a longer war with Napoleon might cause the British to have less interest in the Pacific coast of North America, I don't see how this stops the United States and "Manifest Destiny". In fact if the British don't care about Columbia, how does this stop America from taking the entire District? Canyonjumper mentions an earlier civil war, but such a civil war would need to happen very early in American history. How early depends on when or if California became a part of the United States before the break up. Still even without a fleshed out timeline, its still a pretty cool map.

Before I end this Map Monday I should mention that a modern Cascadian independence movement exists that seeks to take British Columbia, Washington and Oregon from their respective countries, along with other territories, and form a new state. How much support this idea has is debatable, but Jordan Harbour of Twilight Histories suggests Cascadia is more of an America idea and has little support in British Columbia. To be fair there was a 2005 poll that showed a third of British Columbians interested in seceding from Canada, but it said nothing about joining Cascadia. If the Columbians did secede, it is likely they would go their own way or join with other former Canadian provinces to form a new state rather then join up with former Americans.

Honorable mention this week goes out to Rascallite's British Argentina. If you want to submit a map for the next Map Monday, email me at ahwupdate at gmail dot com with your map attached and a brief description in the body of the email.