Inspired by the original literary classic, this horror mash-up tells the story of Robinson Crusoe and his 28-year struggle to survive on an island beset by ravenous zombies. Crusoe is forced to improvise in the wake of total isolation and terror. His only hope may be Friday, a native cannibal woman, as he is caught between the warring factions of cannibals and zombies. Told through the pages of Robinson Crusoe’s diary, this book offers a satisfying combination of serious and silly as readers find just how badly things can go for this all-time favorite once the living dead are added to the mix.

The Royals: Masters of War by Rob Williams and Simon Coleby

The year is 1940. As the Blitz destroys London and kills thousands, the Royal Family looks on. But in this world, the only people with special abilities are Royalty, and the purer the bloodline, the greater their abilities. So why don't they stop the carnage with their powers? A truce between the Earth's nobles has kept them out of our wars--until now. When England's Prince Henry can take no more and intervenes, will it stop the planet's suffering or take it to another level?

Writer Rob Williams (Judge Dredd: Trifecta, Low Life, ADVENTURES OF SUPERMAN and Daken) and artist Simon Coleby (The Authority, Judge Dredd: Year One and Trifecta) team up to bring you this epic of World War proportions. History will be transformed in a way you've never seen before.

Collects THE ROYALS: MASTERS OF WAR  #1-6

Through interconnected eyewitness accounts—emails, text messages, reports, diaries, found video footage, and graphic adaptations, Zombie Apocalypse! Endgame tells the story of the climactic final battle between the ZZ infantry of the New Zombie Order and the fighters of the human resistance. Who will win the endgame?

Three new novelettes inspired by Lovecraft’s Cthulhu Mythos, set against the background of the Roaring Twenties.

Journey to Kansas City, the “Paris of the Plains,” a city of glamor and sin where cults, secret societies and music intermingle. 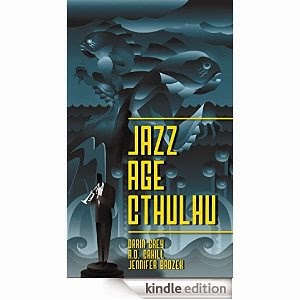 Visit Assam, India, where a British dilettante wakes up one morning covered in bruises and welts, with a dead man in her bed and no memory of what happened in the last 24 hours. Her only clue is a trashed invitation to the exclusive Black Ram Club.

Relax on the resort island of Pomptinia, an Italian enclave of wealthy socialites, expats and intellectuals. But beware - the sea conceals dark secrets.