I now present my interview with author Michael J. Martinez. With years of experience in journalism and communications writing, Mike now has taken a stab at writing his own stories and The Daedalus Incident is the result. Check out our talk below: 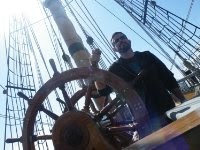 Well, I’m a professional writer working in the greater New York City area. And by professional, I mean more along the lines of journalism, media, communications and marketing. I actually never wrote a novel before. But I’d like to think two decades of other writing were enough to get the ball rolling. Seems to have worked out so far.

What is a normal day like for a professional writer?

I'm not sure I'm the best person to ask, because while I've been a professional writer for the past two decades, the vast majority of that's been in journalism and, as of late, corporate communications. So in terms of my life, it's pretty much like anyone else's: Get up, hit the elliptical, drink coffee, commute to work, write various pieces for my company, commute home, quality time with wife and daughter, a little TV, maybe a bit of fiction writing, then bed.

Now, in terms of fiction, I tend to squeeze it in when I can, which is primarily on weekends. I just got back from a vacation, though, in which I was able to bull through 20,000+ words. And that was awesome.

What is The Daedalus Incident about?

The Daedalus Incident is about a 22nd century Martian mining colony that stumbles across nothing short of a cross-dimensional rift – one that leads to an alternate history in which the 18th century Age of Sail plays out amongst the planets of our solar system. The heroes in both dimensions must come together to seal the rift before an ancient evil is unleashed.

Mars is a popular place to find evil. What do you think it is about the Red Planet that terrifies us?

First off, it's one of the very few lights in the sky that's unabashedly red. And red is the color of blood, of anger, of war. Why do you think we named the red wanderer after the god of war?

And then, on further examination centuries later, Mars was found to be our closest neighbor. It was also found, at one point, to have things that looked suspiciously like canals, huge ones that criss-crossed the entire planet. How terrifying is that, to see our closest planetary neighbor possibly in possession of technology superior to our own? Think about when these theories came out, especially in the 19th century. The world grew much smaller in that century thanks to the locomotive and the telegraph, and the "other" became a serious consideration no matter where you were. And there were a lot of "other" people right here on Earth that terrified folks. Add to that an advanced civilization on Mars, and...well, it's no accident H.G. Wells chose Mars as the source of his invaders.

Even now, Mars threatens to upset our comfortable mental status quo. What if the rovers find signs of past life on Mars? What if they find something actually still living on Mars? That's absolute confirmation that humanity is not alone in the universe, or that we may not even be so very special in our very own solar system. That's very heavy stuff. I have no doubt Mars will continue to make us uncomfortable for years and years to come -- and as a fiction writer, that thrills me to no end.

I have seen your book described as alternate history, historical fantasy and steampunk. How would you describe it?

It’s very much historical fantasy.. The “engine” of sailing the Void between worlds is Alchemy, which can best be described as “mystic science” and utterly fantastical. I know it’s been called steampunk before – I think any alt-history with fantastical elements gets called that at some point – but that’s pretty inaccurate. That said, should things progress, I could see some steam entering into the timeline in the 1800s and combining with Alchemy to produce some…really interesting things.

I should say one of the two settings is historical fantasy. The other is a hard-SF near-future setting. I’d like to think it’s well grounded in modern research, but there’s nothing alt-historical about it.

It came out of a lot of different things. There was a rash of sailing/pirate movies about ten years ago that helped plant the seeds. But in terms of alternate history, I think the novels of C.S. Forester and Patrick O’Brian were the heaviest influences. I always liked how their heroes were very much “normal” folks. There aren’t any Chosen Ones there, just normal people doing their duty. That I liked, and wanted to see that transposed into a space opera setting.

I literally have a bookshelf lined with historical references that helped with this novel, and future ones as well. I have a biography of John Paul Jones, another of Lord Nelson. I read The Autobiography of Benjamin Franklin. There’s a great book called The World in 1800 which was very helpful in terms of where things might end up, and another called Broadsides which details the Age of Sail quite well. Still, the original letters sent by people of the era are always helpful, especially in gauging character voice and motivation. And when I was in San Diego a while ago, I got a chance to walk the deck of HMS Surprise, the replica used in filming Master and Commander. That was about as good as it gets, really.

I do. I've been serializing a novella called The Gravity of the Affair on my website, which details the first command of Lt. Horatio Nelson in my historical fantasy setting. And I think it’s no secret that I've been plugging away at the sequel to The Daedalus Incident. It’s not contracted for, but…well, I’ll keep folks posted as things develop!

In terms of history, I've been kind of hesitant to show my hand, since I’d like to keep folks guessing as to what might come next in the worlds of The Daedalus Incident. But let’s just say I've been on a Napoleon kick lately. I've also been delving into the early history of Alchemy, and some of the latest research into Saturn. My bookshelves keep getting more eclectic as time goes on.

I feel woefully underqualified to answer this, but since you asked, I’ll try. I do think individuals have varying degrees of natural aptitude for creative writing…but I also believe it’s a skill that can be taught (even self-taught) and honed. And as with anything, practice makes perfect. So if you want to be an author, there is no substitute for getting your butt in a chair and writing. Writing takes self-discipline, and the key thing is to just get the story out. Once it’s out on the page, you can revise and revise until it’s right. But until something’s on the page, there’s nothing to hone. So my advice? Write. No matter how bad you think it is, write!
Posted by Mitro at 11:00 AM