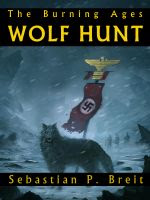 When you think of alternate history, two time periods jump immediately to mind: the American Civil War and World War 2. By far, these two conflicts are the most frequently re-imagined periods in alternate history, with many novels, anthologies and scholarly essays dedicated to them. Among these alternate histories, many posit the idea of modern, or even slightly near-future military elements going back in time to change the course of the war. Harry Turtledove's Guns of the South and John Birmingham's Axis of Time trilogy are only two of the more well-known examples. With Wolf Hunt, Sebastian Breit appears to be embarking on a project similar in scope to Birmingham's well-known trilogy. So when I read Breit's novel, I was looking for it, ultimately, to do one thing: distinguish itself from every other World War 2 alternate history ever written.

At this, I would have to say Wolf Hunt was modestly successful. The premise is a bit too reminiscent of the Axis of Time trilogy for total uniqueness; an allied, U.S.-led force is on its way to perform a humanitarian intervention, when it is pulled back in time to World War 2. After an extremely devastating bout of blue on blue violence which feels just a bit contrived, the up-timers set about trying to change the course of the war, to the detriment of the Nazis. Beyond these similarities, however, many of the differences actually favor Breit's novel over Birmingham's. For one thing, and this is the true hook of Wolf Hunt, over half the modern task force is German. This also makes the eventual blue on blue violence somewhat more explicable than Birmingham's "oops, we just ran into the down-timer U.S. navy" plot device in Axis of Time.

Legitimate difference over national interest rapidly heightens the tension between U.S. navy Captain Stephen Flynn and his German counterpart and friend, Captain Florian Hallwinter. One might be forgiven for thinking that two men who obviously knew and trusted one another as thoroughly as Flynn and Hallwinter would have found some more effective way of dealing with these divergent interests, and confronting their mutual enemies. On the other hand, what actually happens isn't totally unreasonable, given a totally unprecedented and panic-stricken situation, and it's clearly necessary to keep the story suspenseful. This was something which bothered me a great deal while I was reading the book, but less so in retrospect. Still, I would have liked to see more attention paid to this conflict; while it's a necessary element of the plot, the way it's presented comes off feeling just a little bit forced.

Throughout the rest of the book, the parallel story-lines follow Flynn and Hallwinter, as well as their crews. The American sections, while well-written, feel a bit boiler-plate. The Americans have the now almost stereotypical encounters with J. Edgar Hoover, the racism and sexism of the 1940s and so-on.  Will any of the Americans use their future knowledge to try and change the future of American politics, subtly alter American society, or even simply help their grandparents? Hopefully, more of these human interactions will become apparent in future books.  The sections dealing with the modern Germans are Wolf Hunt's strongest element, most distinguishing feature, and clearly the plot which most interests the author. (It's an open question in my mind as to whether the book might not have been stronger without the American plot-line altogether; I will give Breit the benefit of the doubt for now on this score as he seems to be setting up for a longer series in which the Americans will be pivotal).

Captain Hallwinter, clearly a tormented soul whose decisions sometimes seem questionable, his conflicted XO, a young and highly competent Turkish officer, the ruthless Colonel Kaufmann, and even a pair of grousing helicopter pilots seem, on the whole, better flushed out than their American counterparts. And their mission, the overthrow of Hitler and the Nazi Party at the height of their power and success, is interesting, uncertain, and leaves the reader guessing until the end. I hope Breit's second novel, Clash of Eagles, has put a bit more thought into the development of the American plot-line in some non-standard directions. Additionally, there's very little attention paid to non-German and non-American perspectives in this novel. What will all these changes mean for the British, the Soviets and the Japanese? These answers are hinted at, but I'm hoping to see some viewpoint perspectives from these nations in future books.

All that said, I found Wolf Hunt a satisfying read. If you're looking for a book that does something totally new in the field, you'll be disappointed, but this is a fast-paced and interesting story told very well. In fact, most of my problems with the book are probably the type of frustration any reader will have with the first novel in a series, where some things are left for development in the future. Breit clearly knows his subject in great detail, but avoids the sadly all-too-common tendency to overload the reader with technical jargon in favor of a lean and clean story. There are some relatively minor grammatical issues and the writing's a bit clunky in parts, but for a first novel reasonably priced at four dollars (for the e-book version), it's well worth your money. And if, like most fans of alternate history, you just can't get enough of World War 2, Wolf Hunt is almost certainly a book you need to add to your collection.