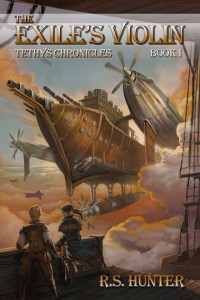 Howdy everybody. It’s Matthew W. Quinn, and this is my first novel review for Alternate History Weekly Update. My first victim is The Exile’s Violin, the debut novel of R.S. Hunter.

Here’s the plot. In a steampunk secondary world of Tethys, one-eyed private eye Jacquie Renairre hunts for both the murderers of her parents and conspirators seeking to start a war in an unlikely alliance with bored socialite Clay Baneport.

Let’s start with the good. The book begins well, with the heroine in the midst of a nightmare. Given all the writing advice I’ve received exhorting writers to begin with a grabber, Hunter does that well. The book also includes some good character moments, like Jacquie’s father not being able to find his glasses and Jacquie points to them atop his head. One doesn’t need to tell readers a character is an “absent-minded professor” type when one can show details like this.

Many steampunk books don’t get into politics, especially the politics of social class and oppression, even though the era (the late 19th and early 20th Centuries) was full of social ferment (the labor movement and feminism), imperialism, etc. This book does, to its credit.

There’re some amusing moments, like revealing what Jacquie hates the most, a later comment about “professional courtesy,” and how a new friend named Clay joins one of Jacquie’s criminal ventures. There are also some good descriptions in the book, including the comparison of an ominous elevator in a foreign library to a trap for travelers, how someone’s wounds “wink” at Jacquie, and various metaphors likening gun barrels to eyes.

Unfortunately, all this is outweighed by the bad. A lot of stuff that’s very important to the story gets introduced very late with no foreshadowing. Alchemy, which seems to be magic-ish, doesn’t get introduced until Chapter 22. Meanwhile, the revelation that a supposed ally is really the evil mastermind behind the conspiracy comes out of nowhere, with his motivation (he’s a poor man who worked his way to the top and wants to overthrow the rich aristocrats so everyone can have the same chance) unforeshadowed. It would have been much better if the character had shown class resentment or there were references to his primary supporters being the poor.

Meanwhile, there are some things that just aren’t believable. Jacquie’s first act of revenge for her parents’ death goes way too smoothly. There’s no indication she’s had any combat training during her time with her father’s friend Serge, but she’s able to quickly bind a mercenary leader. And she’s able to kill far too easily for someone who’s never done it before. Later on in the story, Jacquie and Clay are asked to leave their guns before they meet with a powerful politician. Jacquie refuses to give up the guns, ultimately getting permission to bring her guns in after emptying them. The person in charge of said politician’s security is entirely cool with that and doesn’t put up with much of an argument. That doesn’t seem remotely realistic — she could have extra bullets hidden in her clothes, plus pistols make good clubs.

Later, a man in a very high place is forced to resign after being linked to several terrorist attacks. Attacks in which people are killed. Jacquie and Clay learn about this, then go about their investigations as usual. Firstly, I would imagine there’d be more discussion about whether to even continue the mission, since the conspiracy would seem to have been exposed at this point. Secondly, it doesn’t seem like the politician suffered any further consequences. If this is due to political corruption — I suspect this was Hunter’s intent—it should at least be remarked upon. In our history, Oliver North was arrested, indicted, and tried for his role in Iran-Contra, which was far less destructive than the one depicted in the book.

There’s a lot of time-skipping, filled in by “telling” rather than showing. And there isn’t much telling, for that matter. Six years pass between Jacquie’s parents’ murder and her first act of vengeance, but we don’t learn a whole lot of just what was going on during this time. Obviously some of this is necessary to keep the book at an acceptable length, but I would have filled in more of the blanks—her life with Serge, why she chose to become a detective, etc. There’s another time skip and we find Clay is working for Jacquie in her private-detective agency. This was a bit abrupt—although this character is established as being rich and bored, we never seem them discussing the issue before.

Some good concepts, but not well executed.  4 out of 10. This is Hunter’s first novel, so let’s hope his future work gets better.
Posted by Mitro at 11:00 AM