Map Monday: 28 Whatevers After the First Rage Outbreak by Tsar of New Zealand

28 Days Later was one of the first movies I remember seeing in the theaters more than once. While it got a mixed reception from zombie movie lovers, I still adore it as a unique take on the genre with a surprising twist and a great soundtrack. Although I found its sequel rather "meh", I still would love to see a 28 Months Later. Since it is unlikely we are going to see that anytime soon, I recommend checking out the scenarios the alternate history community has created to continue the story: 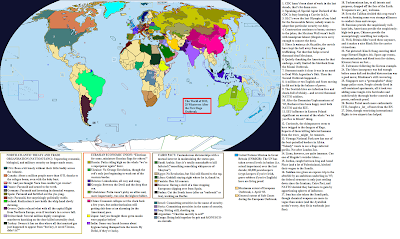 This is "28 Whatevers After the First Rage Outbreak" and you can be forgiven for thinking this is a Bruce Munro map. Although done in his style, this map was actually created by another Map Monday alum: Tsar of New Zealand. It builds on the implied European outbreak we saw at the end of 28 Weeks Later  by showing how the world has dealt with the threat the Rage virus still poses. Tsar provided a detailed description of this world that is complete with a reference to World War Z, another excellent zombie work. In fact this whole scenario is based off a Bruce Munro ASB setting, so he does deserve some credit with the creation of this map.

Honorable mention this week goes out to Falkanner's "First People's Confederation c. 1840 CE". If you want more mappy goodness I recommend the NUKEMAP by Alex Wellerstein. Find out what would happen to your hometown if the bomb was dropped on it.