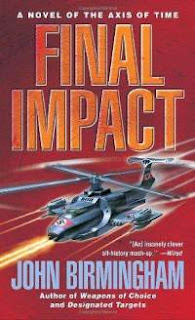 When last we saw our much-loved friends the MNF – Admiral Kolhammer, Julia Duffy, Captain Habali, Mike Judge – and their much-detested enemies – Himmler, Hitler, Yamamoto, etc – in Designated Targets, they were gearing up for a major conflict. Hitler’s desperate attempt to conquer Britain had failed. Yamamoto’s gamble to take Pearl Harbour had succeeded – amid bloodletting and atrocities that would have made more sense in a Paladin of Shadows book – and there were dozens of threads waiting to be resolved in Book 3. I cannot say that I spent a year desperately waiting for this book – only three authors get me THAT desperate – but I was looking forward to it.

I opened the book and I thought…where’s the action?

Actually, that’s not entirely fair. There is plenty of action in this book, but it’s not the action I was expecting.

Consider; at the end of DT, we were led to expect that there would be a major thrust against Pearl Harbour, spear-headed by the former JSDF ship, by the Allies. There would be a major political struggle against J. Egder Hoover (of FBI) fame. Dan and Julia would get married – and a romance was hinted at between Mike Judge and Karen Habibi. There was a team of future Russians operating within the USSR – and hints that the Russians had captured a ship from the future. We would FINALLY find out who was responsible for the racial rape-murder way back at the beginning…and the mystery of Sanction Five. And, and, and…

When Final Impact opens, all of these events have happened. Dan and Julia have not only married, but split up; Dan has gotten himself killed somewhere off-page in the two years gap between DT and FI. Pearl Harbour has been recaptured. The Japanese are FINALLY on the ropes. D-Day is underway, with a massive invasion of Europe, and the Russians are preparing to stab the Nazis in the back. It’s not a bad book, but it has a lot of small problems. I WANTED to see that battle, damn it!

Ok, I have written a trilogy myself – Second Chance – around a basically similar event, and I do understand some of the problems. In 1942, the US had very little that could actually be deployed; the fantasies of citizen soldiers notwithstanding, men with guns and without training are not good soldiers. In 1944, particularly with future help, the US is almost drowning in war production and it becomes a battle of economies. There has to be something between those two periods, and I understand – without approving – the reason for jumping forward. DT no longer works as a book because FI does not conclude the trilogy. We need a Book 2.5.

(I also have a small case of sour grapes as some items here remind me far too much of Second Chance, although there are only limited solutions to the problem.)

In most cases, Birmingham does a fair job of touching on the effects of the ISOT. The treatment of Russia, however, borders on sheer mil-wank fantasy. It is VERY difficult, if not impossible, for the Russians to do as much as Birmingham suggests, the presence of the captured ship – which the MNF seems to let them get away with – notwithstanding. Consider, as Dale Cozort points out, the Soviets were actually VERY dependent upon western aid; just because the shipment of arms and ammunition was not critically important does not mean that the aid was unhelpful.

The Russian industry – I forget if the term ‘hero project’ existed then – was very good at churning out thousands of crude (in industrial terms) tanks, but much less good at the finicky stuff. American radios kept the Russians talking to one another and American trucks kept the Red Army moving. American food kept the Russians feeding and American railway stock kept their network running. If the lend lease from the US is cut off – a POD in its own right – the Russians somehow have to gear up to alter production to replace what they were no longer getting from the US, which is not as easy as it sounds. Building items from the 1950s would take almost as long as the 6 years or so it would take to reach that date.

The knowledge from the future is less helpful than it seems. Birmingham shows us the USSR turning on everyone who would betray Stalin in the future, which would excite major paranoia among the upper soviets. Even without some kindly soul deciding to strike first, they would still have problems doing everything that they are shown doing. They would NOT waste resources – debatable, but understandable from their POV – on an aircraft carrier…and they would not make a jump for Japan. Taking Manchuria and even parts of China makes sense; trying to develop a blue water capability means nothing when they face a lethal threat from the west, Germany. Historically, the USSR did not attempt to build up a navy until their main land requirements were completed.

Q – What is a safe Russian border?

A – One with a Russian soldier on each side.

Sadly, there seem to be far fewer links between the characters as they appeared in WOC and DT; so much of their development happens off-book. This happens to the extent that it is difficult to reconcile them - I liked Julia in the first two books; in FI, she’s a bitch. Nice as it is to see Karen and Mike married…what happened? We don’t know. I can’t see either Roosevelt or Churchill considering Stalin as anything other than an enemy, not after what happened in the first history. And Prince Harry…well, I may have firm anti-monarchist credentials, but I would have expected him to willingly disappear into the MNF, having a free opportunity to escape the Royal Family. (Heh, that little set of details REALLY needs to be explored; the post-war impact on the Royal Family and the British Empire.)

But enough griping. If you read this without any knowledge of the underlying factors of WW2 – or you can suspend disbelief – you’ll enjoy it. I sometimes think that the book goes too far in illuminating what bad people the enemies are – and what nasty people twenty years of the jihad have made of the MNF – but that’s just me. John, it’s a good book, but we do need a section between DT and FI.