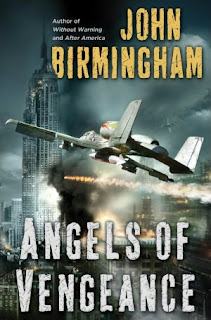 Angels of Vengeance by John Birmingham is the latest (and last?) novel in the trilogy that began with Without Warning.  Some backstory, our tale begins when a dome of energy descends onto North America on the eve of the Iraq War, covering most of the continent. Millions perish and anyone who attempts to enter the dome disappears as well.  The United States of America (except for Alaska, Hawaii, and a small enclave around Seattle) is destroyed, along with  large chunks of Canada and Mexico (plus the Bahamas but no one mentions them at all, so screw it).  While some mourn or celebrate the loss of life, it becomes clear that a world without America is a bad place indeed. The world economy collapses and the global environment is ruined as nuclear reactors fail and fires rage in the depopulated North America with no one around to stop them.

The story continues in After America.  The dome is gone and the North American wilderness is open for recolonization.  The United States is struggling to retake its lost homeland from gangsters, pirates, scavengers and Islamist fighters fleeing the irradiated Middle East (after Israel carried out the Samson Option), which comes to a climax in the epic Battle of New York.  A greater threat, however, comes from Texas where a mad former general will either remake America in his own image or force the country into a bloody civil war.  In the rest of the world, the geopolitical situation is fluid and new powers our testing the old order.

Angels of Vengeance concludes many of the story lines began in the previous two books.  While Birmingham uses many point of views to tell the story, there are three characters who are the primary plot movers, our "angels".  First, we have Echelon agent Caitlin Monroe, or "Commando Barbie" as some call her.  She is on the hunt for the terrorist who instigated the civil war in France and the Battle of New York.   She really wants him dead and will go anywhere and do anything to accomplish her goal.  Second, we have Sofia Peiraro, a teenage girl who witnessed the murder of her family in Texas and survived the trek north to Kansas City with her father, only to learn that he has been murdered.  She suspects it was ordered by General "Mad Jack" Blackstone, governor of Texas, and she is now heading south to avenge her family.  Finally there is Julianne Balwyn, a British-born aristocrat turned smuggler. She is being stalked through Darwin, Australia, now a cyberpunk-esque free port in this changed world, by hitmen ordered to take her and her friends out by someone powerful with a score to settle.  To stop him, Jules will have no choice but to put herself in the open and let her hunters strike.

I have enjoyed Birmingham's works for three main reasons: bringing techno-thrillers to alternate history, not being afraid to kill off important characters and the use of strong female characters in a genre dominated by men.  He did not disappoint me in this novel and I especially was amused by how Microsoft dominates the tech world with their smart phones having that annoying paper clip, Microsoft Where? and people saying "go MSN it."  More importantly, the entire series has been a plausible and very descriptive scenario on what was likely to happen if the United States were to disappear.  It also had good character development and, of course, action.

If I had any real complaint it was how James Kipper turned out.  I felt that he went from a reluctant rebel, to idealistic leader and finally to naive politician.  Considering the events of After America I found it odd how he evolved into someone who could not be bothered with making the hard choices.  Since he is only a minor character in this novel, however, his presence does not do enough to ruin the story, but it is disappointing to see one of my favorite characters lose what made me like the guy in the first place.

I guess the last thing to talk about is whether or not this novel is a conclusion to the series.  Certainly the final epilogue leaves it open for more books and there is still so much going on in the world that could be covered.  The ending, however, might just be the only plausible way to end such a story.  Life does not stop for the characters just because the book ends.  There are no real happy endings, only life going on, with its pitfalls and promises.  I really did enjoy the series and I hope those reading this review who have not read the series will go and pick out these books to read.

Also if anyone wants to make a map of what they think the world of Without Warning looks like, I would love to post it on Weekly Update.