Alternate History Weekly Update must be getting popular because I just had to ban my first spammer from the Facebook fan page.  Now if I can only get an Internet troll to comment on one of the posts I will know that the blog has reached critical mass.  O well, one can dream.

Still I should be happy that we got our first readers from the United Arab Emirates, Slovakia and Georgia (that is the nation not the state).  Welcome to you all!

Got some good stuff coming up this week.  Our newest contributor Henry Martin will be posting a series of diary entries based off his interview set in the 1983: Doomsday universe.  Meanwhile, as part of our "Porfiles of Terrifying Alternate Worlds" theme this month, Korsgaard will be showcasing the Images of 1984 timeline and I will also be reviewing Pride and Prejudice and Zombies by Seth Grahame-Smith and Jane Austen.  Finally, War Blogger will be reviewing Hitler's War by Harry Turtledove.

Are Airships Best Suited Only For Alternate History?

If you thought that you could only find an airship in an alternate history/steampunk setting, you would have been dead wrong.  Check out the Blue Devil 2: 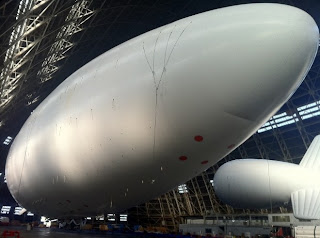 This 370 feet long floating surveilance plaform will be hovering over Afghanistan by the middle of next year.  Wide-area cameras and eavesdropping equipment, all connected to an onboard supercomputer, will be spying for the good guys, providing friendly forces with up to date intelligence.  Hopefully the other drones do not make fun of him for how fat he looks.

This article has convinced me that I have not been keeping you updated on airships.  They are one of the most important tropes in alternate history, besides the multiverse theory.  In the future I will report more often on these whales of the skies, you have my word.

No I am not talking about the video game series of the same name.  I am talking about the film that is coming out on November 25, 2011 in the United Kingdom. This alternate history film, titled Resistance, stars Michael Sheen, Andrea Riseborough and Tom Wlaschiha.  You can check out the trailer below:


Now I know what you are thinking: "The Nazis would not have been able to invade Britain just because D-Day failed!  This is Spike TV all over again!"

Lucky for us, this film is actually based on an actual alternate history novel, published in 2008 by Owen Sheers and also called Resistance!  According to Uchronia, the point of divergence (POD) is in 1941.  The Germans managed to capture Moscow and defeat the Soviet Union. Then a few years later the D-Day landings turned into a major disaster for the Allies (why they still invaded I have no idea), leading to an eventual German invasion of Britain.  While the trailer does not acknowledge much of this backstory, one can only hope the writers had enough sense to at least mention the POD to avoid the inevitable "this is ASB" outcry from alternate historians.

As far as I know there is no plans to bring this film to the States, which is a damn shame. Nevertheless, if you would like to stay updated on how the film is progressing you can follow them on Facebook.

As I mentioned before, last week was Steampunk Week at Tor.com.  Probably the best thing to come out of that week was this article by author Ekaterina Sedia.  The article is titled: Challenges of Writing Alternate History Set in Other Cultures.  In it she discusses various ways authors can address the problem with setting their alternate history in a culture that most western readers are not familiar with.  For her own alternate history/steampunk novel, Heart of Iron, she created an online appendix that you can check out here.  I highly reccomend that you read the article, especially if you yourself are having problems writing your own alternate history.

Imagining a century of tea party rule by Diana Townsend at The Florida Times-Union.

Mitro is founder, editor and contributor of Alternate History Weekly Update. When he is not busy writing about his passion for alternate history, he spends his time working as a licensed attorney in the state of Illinois and dreams of being a published author himself one day.
Posted by Mitro at 11:00 AM