I present to you my interview with Guy Saville, author of The Afrika Reich.  Those looking for more information on the novel can check out War Blogger's review of the novel. 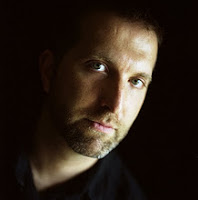 I was born in the UK and before becoming a full-time writer worked as journalist, first in South America and later North Africa.

What kind of stories did you report on as a journalist?

I was a freelance foreign correspondent and covered a variety of stories, everything from a coup in Ecuador and fight clubs in Rio to the aftermath of 9/11 in the Middle East and the making of Star Wars in Tunisia .

It was always something we discussed in history classes at school, especially the question what would the world have been like if the Nazis won the war. That question was particularly pertinent because I’m part of the generation that still had a living link to that period (my grandfather landed at D-Day). It captivated my imagination to think how our life might have been under the swastika. This was cemented in 1992, when I read Fatherland by Robert Harris for the first time.

What is your novel The Afrika Reich about?

Primarily it is a human drama about revenge, set against the backdrop of an alternate history where the Nazis have conquered Africa. It imagines Britain being wiped out at Dunkirk and having to negotiate a peace deal with Hitler – which in turns allows him to defeat the USSR and be in a position to divide the world between the Third Reich and British Empire.

What inspired you to write The Afrika Reich?

After reading Fatherland, I always wanted to write my own story set in a world where the Nazis were triumphant. Then I read The Man in the High Castle by Philip K. Dick. In that book there is an oblique reference to the ‘terrible Nazi experiment in Africa’. That line caught my imagination and over the years I developed my own story with Nazi Africa as the setting.

It was designed by my publisher, Hodder UK. I had always envisioned the outline of Africa with a swastika in it (as seen on my website and eventually used on the Spanish edition). However, because Hodder wanted to sell an export version to Austria and Germany, where it is illegal to put swastikas on books, they had to come up with the current cover design.

The backdrop to the SS-and-palm-tree logo on the hardcover is actually African bison fur. Nobody could tell me why they had chosen this – but I was always very partial to it!

I suppose I should say that primarily I see my book as an adventure story rather than a work of pure alternate history. Nevertheless, its uniqueness comes from its African setting. As far as I’m aware nobody has written an entire novel about this subject; it’s a chance for people to learn about Nazi plans that have been mostly forgotten.

I’m currently reading Christopher Browning’s The Origins of the Final Solution, as well as Robert Harris’s latest The Fear Index.

Any planned sequel(s) for The Afrika Reich?

The Afrika Reich was always planned as the first part of a trilogy – with each part looking at a different aspect of the Nazis’ racial plans for the continent. I’m currently working on the second book which is about the Madagascar Plan.

Is The Afrika Reich going to come out as an ebook soon?

The Afrika Reich is already widely available as an ebook in Europe, including on Amazon Kindle and the iBook store. For rights reasons it won’t be available in the US till the beginning of 2012.
Posted by Mitro at 11:00 AM