Preface: A personal point of view is probably quite rare in this genre, but I am going to give it a try. For as long as the readers can bear it, I will present what might have been. Personally biased to allow my own survival - and that of my immediate family, I will nevertheless attempt to present a picture compatible with what I have written in the article entitled "Piedmont Republic (1983: Doomsday)." Join me now as I revisit that alternate life in the post-apocalyptic world known as "1983: Doomsday."
Saturday, Oct. 1, 1983 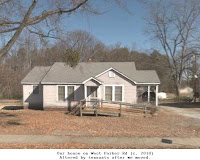 Wow! What a week this has been! I am sitting here on the porch with a pad and a pencil after being cooped up in the house for most of the week. The light is better, since we have not had electricity in our house ever since last Sunday evening when - excuse the expression - "all hell let loose."

The fact that we are all alive now means that previous doomsayers were only partially right. There seem to be pockets of civilization even after an 'all-out' nuclear war which seems to have begun last weekend between the United States and Russia. It had looked like President Reagan had cooled down, for he had addressed the Soviets in an address earlier in September and was scheduled to address the UN last Monday (9/26). Something obviously went wrong, though, and the Soviets sent what the panicked newscasters were saying 'all' their nukes at the United States.

Since no one has heard anything from outside of the upstate, I can only assume that the US government as we know it is greatly hindered at this time. I expect any day now, though, that calls will be made to call up able-bodied men to fight the Soviet invasion. So, before that happens, I am going to write down what has happened here in Greenville so far. Maybe someday this tablet will be worth something.

The boys - 'Jimmy' and 'Tim' - were already in their pajamas last Sunday (Sept. 25) and playing in the den (which had become their bedroom earlier in the year) and I was rocking Rebecca while watching '60 Minutes' for my weekly fix of important news of the world. And then, the unthinkable was announced. It was around 7:45 pm and the announcers were saying a MAJOR nuclear attack was being made on the United States. There was no real way of knowing what the extent of the attack was going to be, but all major cities and military bases were suspected targets. Reports were that President Reagan (in New York) and VP Bush (in Washington) were being evacuated and that a counter attack had been launched.

Emergency instructions included unplugging everything and filling the bathtub with water. They recommended turning on portable radios, though, for further instructions. By all means, they said, stay indoors unless authorities call for evacuation. I immediately did as they said in anticipation of what they called an "Electromagnetic Pulse" - what nukes can do if exploded in space. I like science fiction, so I had some idea of what this might be like. As the water was running in the tub, I got a telephone call - it was around eight o'clock and Debbie was calling from work to see if I had heard what was happening. Since she said the phones were 'jammed' we reluctantly said goodbye and I hoped to see her around midnight.

As they had said on tv, the lights did go out around 8:15 and soon after that rumblings like earthquakes were felt all over the area. The closest blasts were in Oconee county, but I don't think it was a nuke. To the south, though, there had been several rising clouds just over the horizon. I assume it was Columbia and Augusta - and maybe the Savanah Nuclear facilities. I guess those reactors were more of a threat than Oconee. Up I-85 to the northeast, it looked like Charlotte has also been a target. I wonder how many targets were hit.

When Jimmy, just 5 years old, asked me what was happening, I told him that bad guys had attacked our country and made the lights go out. Timothy, now 3, as usual resistant to bedtime, began to cry because there was no night light. I let all three of the children in bed with me. I had tried to call my parents in Albany, Ga., but had found out that the phones had died when the lights went out. When midnight came and went, I became worried about Debbie, but assumed she would be home eventually (sometimes people don't show up to work even in good times). I was right, she worked a double that night.

As I had feared, I found out that the water supply to the house had been disrupted. I had let the toilet fill up over night and when I flushed it, no water came in to the tank. I decided that until we could go outside we would 'flush' the toilet with a single bucket of water from the tub only when absolutely necessary. Earlier today, we finally ventured outside to set up a makeshift 'bathroom' in the woods behind the house. Most of the water in the tub has been reserved for drinking and sponge baths until we can get utilities restored.

Debbie got home on Monday after being given the night off. It turned out that emergency response protocol put a high priority on the availability of medical personnel, so police escorts were being provided after a satisfactory schedule had been worked out. Debbie returned to work on Tuesday evening. The officer that escorted her had told me that I would be escorted to the nursing home for my shift Monday night. He waited on the curb as Debbie entered the house, and then escorted me as I drove our car down to Bi-Lo to get what I was told was our 'rations.' According to the policeman, fallout coming up from Atlanta was already being detected by noon on Monday, so only one of us went to stand in line at the grocery store.

Our car is an old one, so it did not suffer from the fate of the new electronic systems. The radio, with its transistors, is useless, but then, the local radio stations suffered a lot from the 'EMP' that sent most of us 'back into the dark ages'. Local representatives from the federal government seem to have had a plan in place to secure the stores with some sort of police action. However, all the stores did not fare as well as we found out as we got in line at Bi-Lo. I saw evidence of vandalism, though, which undoubtedly was the reason of some of the sirens I heard the night before. While I was at the store, though, there was a commotion as some ruffians pushed past the guards at the door and rushed in to 'help themselves' to the goods inside. It was a shame to see people risk imprisonment when people were there to help us get our share.

Loaded with food and toiletries I drove back to the house to unpack. With the cupboards filled, I went by myself to K-Mart to by some hardware and stuff with a little cash we had on hand. Unlike at Bi-Lo, which had actually refused my check, the folks at K-Mart wanted money, which was fine with me, because we are on a budget and can not afford bouncing any checks. Of course, by Thursday all the banks had closed anyway. The line had been so long at the banks on Monday that I decided to wait 'til the next day. I figured I could go by on the way home from work. American Federal Bank prides itself in customer service so I figured 'no problem.' Anyway, it was almost dark outside when I got away from K-Mart. The shelves in that big store were almost empty any way. To its credit, though, there was no 'price gouging' as the clerks worked with paper and pencil to write up receipts.

At the house, we opened cans of 'Beanie Weanies' and drank some tepid Pepsi from the rations. We would not be able to heat anything until it was safe to go outside. Earlier today, five days later, I made the first fire in a pit I made in the back yard. The ground in the woods was still covered with dead wood in the underbrush, so our first hot meal on the 'camp stove' went well! The boys thought it was neat, though Vienna sausages make really awful hotdogs!

I don't know how long we will be able to continue working so far from the house. Though we have served as a car pool for some of the neighbors who work near the hospital, the gas won't last long. Authorities at the hospital assure us that as medical personnel we do have access to some gasoline reserves, but that won't hold out for long. Apparently the pumping stations between Greenville and Texas are all inoperative. The tanks in Anderson are being secured, but I hear they are having trouble with some local people claiming that resource as their own. I wonder how long the gasoline will hold out.

On the way home Tuesday morning, I had been able to get only $40 from the bank even though we had over $400 in it. They told me they wouldn't be able to give out much more cash until getting more from Charlotte or Atlanta -- both feared destroyed. Debbie says refugees are starting to come in from Columbia and Charlotte, and Atlanta most certainly was hit bad. It looks like what cash we have now will have to last. I wonder how long we'll be able to write checks?

With the threat of fallout over our heads, the rest of the week was spent indoors except to go and come from work. Talk is that Beth Eden Nursing Home will be starting to take in refugees soon, but there are no beds free. I don't know how that is going to work, but it doesn't sound good to me. Well, I'm going to go in and get cleaned up so we can drive to church tomorrow. I hope we can keep going there, but it is four miles -- Down Hill -- so a car is almost a must to get home! Oh well, God knows our hearts.