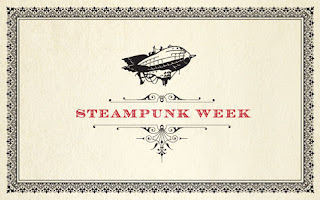 It is Steampunk Week over at Tor.com.  You can check more information here, but expect articles, interviews and essays on steampunk over the next week from that site.

For those who do not know, steampunk is a sub-genre of science fiction  that came into prominence during the 1980s and early 1990s. Steampunk involves a setting where steam power is still widely used (usually Victorian era Britain) that incorporates elements of either science fiction or fantasy. Works of steampunk often feature anachronistic technology or futuristic innovations as Victorians may have envisioned them, based on a Victorian perspective on fashion, culture, architectural style, art, etc. This technology may include such fictional machines as those found in the works of H. G. Wells and Jules Verne.

Despite being separate genres, alternate history and steampunk often go hand-in-hand with one another.  In both genres you can find airships and Analytical engines.  Not only that, but alternate history can be given some credit with starting the genre thanks to Michael Moorcock's The Warlord of the Air, which is considered by some to be a precursor to steampunk.  Other famous alternate history/steampunk mashups include the award winning The Difference Engine by William Gibson and Bruce Sterling, the RPG Deadlands, the previously mentioned Clockwork Century series by Cherie Priest and S. M. Stirling's The Peshawar Lancers.  Online works that are influenced by steampunk include the Ill Bethisad collaborative project.

So go check out what is going on at Tor.com and expand your knowledge about alternate history's cousin.
Posted by Mitro at 3:00 PM