Making California British is a popular past-time of alternate historians. The common ways to do it is to either a) have the American Revolution fail and then have British North America expand to the West Coast or b) have Britain seize the territory from Mexico in a timeline where North America has balkanized. Of course there could be a dozen other scenarios where a British California can exist, but those are the two divergences I personally see the most.

I say the above because I have no idea what the scenario is for this flag: 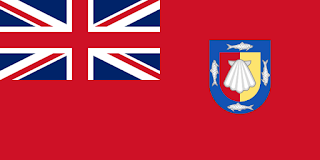 This is the flag of British California and is designed by Keperry. It doesn't come with a story so I can only speculate. That being said, I like the red field. It reminds me of the early versions of the Flag of Canada when it was still a dominion. Perhaps that is the scenario we are going for. One where California is actually a province of Canada, which actually happened in a favorite web original timeline of mine that is sadly no longer available online. Don't even remember the name even, but I know it involved Babbage creating his Analytical Engine so if anyone knows what I am talking about, please share the link...wait I'm supposed to be talking about the flag. Anywho, its good looking, simple and I got to be nostalgic. Good times.

For more flag goodness, see what could be the new flag of Australia, because I just can't stop talking about former and fictional British colonies.