Good day everyone. I hope you all had a fun weekend. Now that October is here I am starting to feel a little...wicked. Not sure exactly what that means, but since this is the season to celebrate what goes bump in the night, I may touch on some of those terrifying alternate histories that keep us up at night. Let see what nightmares we can create when we change history.

By the way, I am going on a mini-vacation this weekend, so no Weekly Update next Monday.

Headline: The USS Constitution Is The Only US Ship to Sink Another Ship...Good! 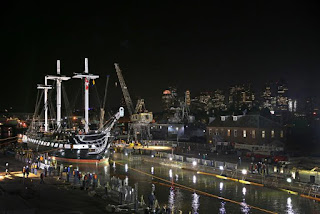 I think a lot of people were surprised as I was to learn that the USS Constitution is the only commissioned ship in the US Navy to have sunk another ship in action. Also known as "Old Ironsides", this wooden-hulled, three-masted heavy frigate that was named by George Washington, America's first president, was famous for its actions during the War of 1812 and continued to be in service up to the American Civil War before becoming a museum ship in 1907. Currently its in dry dock for a three-year restoration program.

So what is my reaction that this is the only ship in my nation's navy to sink another ship? Good! It means my country hasn't been at war with anyone who maintains a navy of their own. I mean that really is a good thing. Its a sign that the US has been peace with the great powers of the planet for a long time and I hope she continues to be the only ship of its kind for decades to come. If my great-grandchildren can tell their great-grandchildren that little tidbit, then the world will really be a better place.

I have seen this meme before, but it bears repeating. 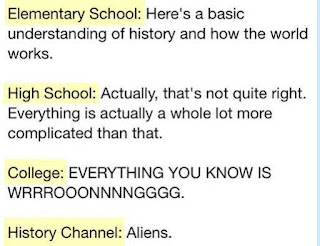 You could also add this one: "Law School: Aww, how cute. You thought history was going to help you."

Speaking of pictures, you may also enjoy this artwork from The Man in the High Castle.