I've been wanting to talk about the Tarrantry Saga for a while now, but have held out because I honestly haven't read any of the Tarrantry stories. Still its one of the oldest collaborative alternate histories, with stories from the late 1990s, that is not associated with any of the major communities and I felt it should get some attention. So if you don't know what Tarrantry is, lets get stated with this map: 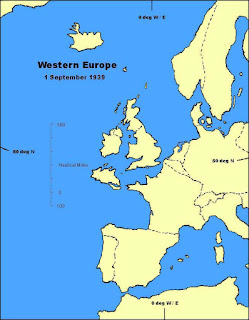 Yep, that is a third British Isle, no doubt made of the bodies of all the butterflies that needed to die so we could get those 1939 European borders we all recognize. The backstory is that Tarrantry had a Celtic culture that became friendly with Rome and later became a semi-independent duchy of France. When the French Revolution, the Dukes split from the Republic and Tarrantry gained independence and the dukes were promoted to royals by the Congress of Vienna. Wanting to preserve their independence, they built up their navy for defense, although due to their size they were only ever a middling sea-power at best. Tarrantry soldiers played roles in several important events in the early to mid-20th century, including World War I, the Spanish Civil War and World War II.

Although Tarrantry is ASB, plausibility was never the intention. The Saga actually got its start as a thought exercise on the Battleship v Battleship discussion board (now defunct) about what ships a middle-rank European maritime power might build in the first half of the 20th century. The discussion helped flesh out the Tarrantry universe and led to several short stories. For a time the Tarrantry Saga was actually quite popular, with flags for the Royal Terrentrian Navy and a more detailed maps of Tarrantry being created. Someone even thought the Saga was even notable enough for a Wikipedia article, although it was later deleted.

Sadly, many of the sites associated with the Saga have gone offline, but you can still find references to them at places like The Naval Fiction Board. I still want to read some of the Tarrantry stories one day since they are part of an interesting period in the history of alternate history community. With so many alternate historians centered on just one site, its important to remember that back in the day things were more decentralized and we got a lot of original and fascinating takes on alternate history.