So I am ending the Videos for Alternate Historians segment. It just did not produce the page views I was expecting. Currently there is nothing in the wings to replace, but if you have any ideas let me know on Facebook, Twitter or ahwupdate at gmail dot com.

At the moment I am interested in doing more with alternate history maps, but we shall see.

I'm on late shift this week, so my apologies if posts do not go up on their usual times.

The Politics of State Secession

Last week there was a lot more talk about state secession and the politics behind it. Although a majority of the current movements are strongly conservative, that is not always the case, especially with the liberal Baja movement who proposed the creation of the new state over disputes with the conservative Arizona government.

More importantly, it is incredibly difficult to create a new state out of an existing state. The American constitution requires both the approval of the state and federal Congress. In fact this has only happened twice in American history, once to prevent a war (Maine in 1820) and once during a war (West Virginia in 1863). Even the issues currently pushing liberals and conservatives to create a new state are not serious enough to make the majority of the people living in these regions to give up on the traditional democratic process. Nevertheless, some people have imagined what America might look like if the state secession movements got what they wanted: 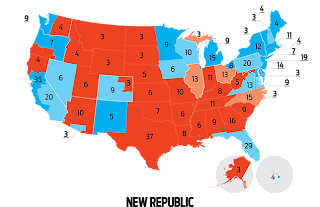 Above is a map created by Nate Cohn at the New Republic. It features the electoral college breakdown of the 2012 Presidential election if some of the current statehood movements were successful. Although Obama would have still won, the Senate would have gone to the Republican party, giving them complete control of Congress. Nevertheless, Nate's map is incomplete.  Michael J. Trinklein, author of Lost States, pointed out that Nate forgot to include the one statehood movement most likely too succeed: Puerto Rico. I also want to point out that the statehood movements in South Florida and west/south Texas are not included as well. Do you see anymore that were missed?

Update: The Casebook of Newbury & Hobbes by George Mann

Who is George Mann? That was a question I asked myself as I saw his name pop up more than once this week. Here is a description of his most recent book, The Casebook of Newbury & Hobbes, from Amazon:

If you want to learn more about the author, you should check out James Floyd Kelly of Geek Dad's review of his most stories where he said: "Whether you love or hate steampunk, if you love great characters, good plotting, twists and turns, and a large story-arc that slowly develops and grabs hold, you really owe it to yourself to give the Newbury and Hobbes novels a read." James also posted a short interview with George Mann and you can check other interviews with the author at SFX and Geek Girl.

Paradox has implemented a new phase in the ongoing Early Access program for War of the Vikings, the upcoming close-combat game from Fatshark. New content in the update, which is entitled “Veiðimaðr” or simply “The Huntsman,” will give players a chance to try three new profile loadouts on top of the starting three, including the Champion Class with access to the deadly Dane Axe. Several optimizations and adjustments have also been made as part of the ongoing development of War of the Vikings, which players are now experiencing firsthand through participation in Early Access, with their feedback directly affecting the course of the game.

As a key component of War of the Vikings’ creation, Paradox and Fatshark are working to ensure that players’ in-game Vikings have access to the finest possible beards. This ongoing search for epic facial hair has culminated in the “Beastliest and Bestest Beard Competition” now being held within War of the Vikings’ community. Ambitious beard cultivators may submit their personal grooming achievements to the developers, with the winners’ real-life beards to be added to the final game. Details on the competition can be found here.

Oct 24: Science of Fiction film fest hosted by Matthew Buchholz, author of Alternate Histories of the World, at Tuscon, AZ.

Nov 8-9: The Festival of Converging Histories at Walla Walla, Washington.

Dec 31: Deadline for your submission to Rite of Passage: Road to Nicodemus anthology.

10 Blog Titles that drive MASSIVE TRAFFIC at The Masquerade Crew.

All the Evidence that Time Travel is Happening All Around Us by Vincze Miklos at io9.
Sobering Counterfactual Economic “Statistic” of the Day by Gavriel D. Rosenfeld at The Counterfactual History Review.
Tough Call: The Americas That Might Have Been by Larry Smith at Tribune 242.

Dieselpunk combat game Aerena: Clash of Champions now out on Steam Early Access by Emily Gera at Polygon.
Spice Road: an alternate history trading strategy game, now with demo by Tom Sykes at PC Gamer.
Steampunk Tower Is Our iOS Game Of The Week by Rob LeFebvre at Cult of Mac.

Ratchet Retrocast Episode 17 – Leaping Into a Cabin in the Woods Next to a Lake on the 13th…This Can’t Be Good at Earth Station One.

Elementary 2.4: Poison Pen at Thinking about books.
Fiendish Schemes by KW Jeter at Locus.
If Kennedy Lived by Jeff Greenfield at Seattle PI.
Iron Sky at The Punkettes.
The Merchant of Dreams by Anne Lyle at SF Signal.
Odd Men Out by Matt Betts at SF Signal.
Revolution 2.4: Nanites and ... Maybe Aliens? at Paul Levinson's Infinite Regress.
The Violent Century by Lavie Tidhar at Staffer's Book Review.

Matt Mitrovich is the founder and editor of Alternate History Weekly Update and a blogger on Amazing Stories. His new short story "Road Trip" can be found in Forbidden Future: A Time Travel Anthology. When not writing he works as an attorney, enjoys life with his beautiful wife Alana and prepares for the inevitable zombie apocalypse. You can follow him on Facebook or Twitter.
Posted by Mitro at 11:15 AM

Email ThisBlogThis!Share to TwitterShare to FacebookShare to Pinterest
Labels: Calendar, George Mann, Paradox, secession, The Casebook of Newbury and Hobbes, War of the Vikings