Does the Sun Set on the British Empire? 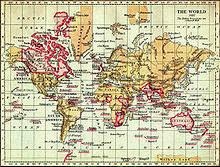 My previous guest post, Rethinking the War of 1812, highlighted the use of structured scenarios and less plausible outcomes in exploring counterfactual histories of our “strangest war.”  In reading Charles Emmerson’s 1913: In Search of the World Before the Great War, a tour d’horzion of many of the world’s metropolises 100 years ago, I was surprised to find a similar discussion of the future of the British Empire (p. 435-6).

Emmerson first notes that Richard Jebb’s The Britannic Question, published in 1913, presented two structured pairs of possible outcomes.  The first outcome, the fading ‘Colonial Dependence’ and a future ‘Britannic Alliance’—his preferred option—of self-governing ‘Britannic’ states, focused on the question of sovereignty.  Jebb’s second pair consisted of two versions of ‘Imperial Federation,’ one without and one with racial equality.  In the latter, India enjoys a stature equal to that of Australia and Canada. Jebb wrote that which path would occur—perhaps a combination, perhaps none—remained to be seen.  Collectively, these scenarios paint optimistic futures where the “Sun Never Sets” on the British Empire.

Emmerson then writes that other authors at the beginning of the 20th century presented more dire, but ad hoc scenarios.  He cites a 1905 pamphlet, entitled The Decline and the Fall of the British Empire, purporting to be published in Tokyo a hundred years in the future, in 2005.  In this future world, Russia rules India, and Germany governs South Africa.  Egypt has gained its independence, Canada has joined the United States, and Australia is a Japanese protectorate. In this pamphlet, supposedly published for the edification of Japanese imperial strategists, the Britain of the future is an empire in decline, and perhaps finally extinguished.  “As Babylon and Assyria have left us their monuments, Egypt her pyramids, Carthage her Queen, and Rome her laws, so too England has bequeathed to posterity Shakespeare and her world-wide language. The history of the British Empire has become a lesson for mankind, the story of her fall a reminder to living Empires of those ‘subtle influences’ which are ever present, that quicken the germs of national decay, and transfer the sovereignty of the earth.”

These “subtle influences” included: the rise of the city over the countryside, the loss of Britons’ maritime skills, the growth of refinement and luxury, the absence of literary taste, the decline of the physical form of Britons, the decay of the country’s religious life, excessive taxation, false systems of education and, finally, the inability of the British to defend the empire.  All of these problems existed in 1905, and it only took a small effort of imagination to extrapolate forward a century to conclude that Britain’s empire was not guaranteed to last forever.  Such pessimistic projections judged that the seeds of its fall had been planted and, to mix metaphors, perhaps the rot was beginning to set in. Hence, these scenarios present the opposite outcome where the “Sun Inevitably Sets” on the British Empire.

A century later, Jebb and his contemporaries have left a rich treasure trove of counterfactual histories to explore and develop.  Their alternative futures at the beginning of the last century could be used as counterfactual histories of the last 100 years. Those interested in imaging and extrapolating from these works might want to consult two newer, but equally sweeping volumes: John Darwin’s After Tamerlane: The Rise and Fall of Global Empires 1400-2000, and Jane Burbank and Frederick Cooper’s Empires in World History: Power and the Politics of Difference.  Both explain how empires worked and why they persisted in a variety of geographic and cultural contexts.  Rich stuff for fashioning counterfactual tales.