Meanwhile, on the other side of the world, the slave Omar ibn Barir finds his life turned upside down when his master's religious sect is banned. Unexpectedly freed, he joins the Caliph's military forces—just as war is brewing.

"Everyone remembers exactly what they were doing the day President Kennedy tried to kill them."

In 1962, the Cuban Missile Crisis brought the United States and the Soviet Union to the brink of the nuclear war. The crisis was averted, but what would have happened if war had broken out? In "Resurrection Day," award-winning author Brendan DuBois brings this horrific concept to life...

Winner of the Sidewise Award for Best Alternative History Novel of the Year. With new Author's Afterward for the this edition.

The Great Game by Chris Nuttall

After the uprising in London, Lady Gwendolyn Crichton is settling into her new position as Royal Sorceress and fighting the prejudice against her gender and age that seeks to prevent her fulfilling her responsibilities. But when a senior magician is murdered in a locked room and Gwen is charged with finding the culprit, her inquiries lead her into a web of intrigue that combines international politics, widespread aristocratic blackmail, gambling dens and personal vendettas… and some of her discoveries hit dangerously close to home.

Continuing on from the end of The Royal Sorceress, The Great Game follows Gwen’s unfolding story as she assumes the role formerly held by Master Thomas. A satisfying blend of whodunit and magical fantasy, it is set against a backdrop of international political unrest in a believable yet simultaneously fantastic alternate history. 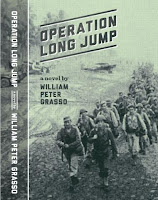 Alternative history takes center stage as Operation Long Jump, the second book in the Jock Miles World War 2 adventure series, plunges us into the horrors of combat in the rainforests of Papua New Guinea. As a prelude to the Allied invasion, Jock Miles and his men seize the Japanese observation post on the mountain overlooking Port Moresby. The main invasion that follows quickly degenerates to a bloody stalemate, as the inexperienced, demoralized, and poorly led GIs struggle against the stubborn enemy. Seeking a way to crack the impenetrable Japanese defenses, infantry officer Jock finds himself in a new role—aerial observer. He’s teamed with rookie pilot John Worth, in a prequel to his role as hero of Grasso’s East Wind Returns. Together, they struggle to expose the Japanese defenses—while highly exposed themselves—in their slow and vulnerable spotter plane. The enemy is not the only thing troubling Jock: his Australian lover, Jillian Forbes, has found a new and dangerous way to contribute to the war effort.