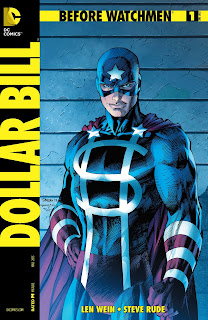 This was a one-issue comic focused on Dollar Bill, the bank-sponsored vigilante most famous in both Watchmen and the Minutemen title for being a well-meaning do-gooder who was rewarded for his efforts with execution by firing squad when shot by bank robbers after his marketing-team mandated cape got caught in a door. I know that, given its nature as a tacked-on obvious last minute cash grab revolving around a hero whose greatest legacy may be a running gag in The Incredibles, you may be skeptical that this may be even worth looking at. I know I did, especially after Moloch. So I’m pleased to say that this was a very pleasant surprise.

Dollar Bill, or William Benjamin Brady as he’s known out of costume, was a Nebraskan All-American collegiate sportsman whom, following a career-ending injury, struggles to find a new purpose. Luckily for Brady, he lands a role as the mascot superhero of National Bank, treating him as a marketing ploy, as do the Minutemen, who take him on board for the publicity it will bring them. Yet it is here, once again in uniform, again before cheering fans, and fueled by adrenaline and renewed purpose, he takes to the role of Dollar Bill with enthusiasm and surprising sincerity – right up until a revolving door saw him on the wrong end of a Chicago typewriter.

The final result is a tale you never thought you needed to know until you read it. The title takes advantage of the fact that we don’t know much about Dollar Bill aside from his time in the Minutemen and his untimely death, and uses it to develop and humanize a character that so many of us wrote off as a joke. The tale of a Dollar Bill suddenly changes from a bank mascot doomed by his marketing team, to that of Bill Brady, a well-meaning and likeable guy who found his second wind in costume, and despite some struggles, gave everything he did his all, and it cost him is life. It cast an entirely new light on the character, allowing you to fully grasp the tragedy of his passing, to the point you may never look at the Dollar Bill the same way again.

Written by Len Wein, who also wrote Ozymandias and The Curse of the Crimson Corsair, Dollar Bill reminds us why he may well be the unsung hero of Before Watchmen, and topped off with a fantastic neo-Golden Age art style by Steve Rude, Dollar Bill managed to do in one issue with what was before a gag character what some of the other titles struggled to do in four to six with the main cast – tell an interesting story that casts new light on the Watchmen universe and its inhabitants, and enhances both in doing so. A pleasant surprise that comes highly recommended.