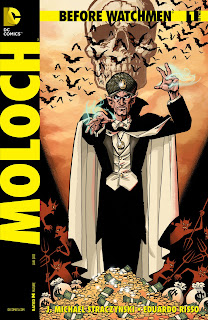 Moloch is the first of the two additional miniseries’ that were added to the lineup months later to make more money/fill the production gaps depending on who you ask. This two issue series focuses on the villain Moloch the Mystic, as he first descends into the life of a crook, rises as one of the first ‘supervillains’, until in jail, he finds religion – and on parole, as Ozymandias offers him a long-awaited chance at repentance.

The first issue is decent enough, and it was interesting to see just how a villain comes to be in the world of Watchmen. The title really collapses in the second issue, mostly due to the title’s portrayal of Ozymandias, as well as blurring the line somewhat on its own plot line and that of the original Watchmen. The art in both is fantastic, with Eduardo Risso sort of giving the title a darker take on the retro look in Minutemen and Dollar Bill and my only real complain is Moloch looks like Nosferatu.

Overall, it’s a title that, though decent for the first issue, the second issue ultimately ensures that the series falters, ending up as a title worth a quick browse, but not much else.