Review: The Kronos Interference by Edward Miller and J.B. Manas 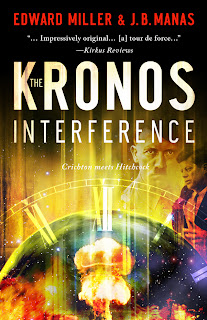 Whether or not to use your time machine to kill Hitler is a question that plagues everyone, not just alternate historians. The Kronos Interference by Edward Miller and J.B. Manas provides adds its two cents to the discussion. It is another installment in the classic time travel genre where our hero travels back in time to prevent something horrible from happening.

Physicist Jacob Newman is pulled from his family and his job when he gets a call about a strange vessel discovered at the bottom of the South Pacific. Seemingly alien in design, Newman and the team of researchers quickly find evidence of time travel by some unknown force that has been studying violent episodes of human history.  Some believe whoever created the vessel has been building a case against humanity and a judgment day is imminent. To forestall the end of the world and to save his own family, Newman travels back in time 1924 to kill Adolf Hitler when he is still locked in prison. There is a specific reason he chose this date: his grandfather was part of an abandoned plot to kill Hitler and now Jacob is going to convince him to go through with his original place. As can be expected from time travelers with good intentions (see 11/22/63 and The Company of the Dead) the resulting outcome does not go as expected and paradoxes abound.

The plot was solid, but my greatest issue with the story is with the characters. I found them to be unrealistic in their depictions. First, they took everything in stride, whether it was murder or being stuck on the bottom of the ocean inside an alien vessel. The character were limited in their abilities to express shock, fear or awe in situations when they should have been freaking out. There was also too much tell instead of show in the novel. I only knew that the character Beeze was the comic relief because I was told he was funny by Newman. Finally, and this is always a big annoyance of mine, there were just too many instances of dialogue with a character saying "as you know". People generally do not use that phrase when stating the obvious, and even if they do, they do not use that phrase exclusively.

I really wanted to like this novel, especially after seeing how many 5 star reviews it got on Amazon and Goodreads. I did find Newman's interview with Hitler to be one of the more intriguing moments of the books, so there are pros to the novel that prevented me from giving it a lower rating. I would check out some of those other reviews as well before you make your final decision, but in my opinion the The Kronos Interference is a story with potential, but poorly executed.