The Maple Leaf (Not Quite) Forever: Canada in Alternate History 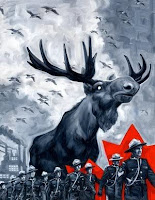 As a proud Canadian, I can’t help but look forward to see how the second largest nation on Earth does in alternate histories. However, I’m usually left with a sinking feeling, mostly because my home and native land seems to be a favorite stomping ground, and always toward the top of the “To Conquer” list in American dominate AH’s, or an unlucky pawn in different British Empires and the rest of the world, and, if the Nazi’s won the Second World War, you can be sure of one of two things: a) it’s the refuge of a fleeing British Monarchy and government, or b) yet another colony of Hitler’s. Well, maybe that would be better than the United States of North America, I dunno.

Often times, the nation is a fraction of its current, gargantuan size, composed of only the original provinces of Ontario, Nova Scotia, New Brunswick and Quebec (unless the latter broke away), or, rarely, even larger. The War of 1812, the Oregon Crisis (54° 40° or Fight!), the Trent Affair, and plan old Manifest Destiny are popular POD’s, though, of course, the butterflies and Bats from Space that are Aliens would cause damage for any POD around the world…

I don’t mind too much, as its all fiction. But it seems to me that when Canada is involved, there are three categories that it can be divided into:

1. “Greater Canada”: This is primarily a “Canada wank” TL, where the Thirteen Colonies that became America instead joined Canada to become a massive, continent spanning Dominion of the British crown, or simply that Canada invades the US and, somehow, improbably, wins (though, listening to this song, you may think we’re one step away from following in our former Colonial Master’s shoes) Of course, these TL’s are rare, although I would consider Harry Turtledove’s The Two Georges as a “Greater Canada” TL (even including an RCMP analogue, the Royal American Mounted Police!)

2. “Lesser Canada”: Canada doesn’t stretch into the Great Plains, much less British Colombia and often times Quebec will be independent. Basically, only OTL Ontario would be “Canada”, as the Maritime Provinces might have either become part of the US, or simply remained colonies of the British Empire. I made a “Lesser Canada” in my major Timeline “French Trafalgar, British Waterloo,” the rest of OTL Canada becoming the republics of Assiniboia (Manitoba, Saskatchewan, Alberta, North West Territories and Nunavut) and Alyseka (Russian Alaska, BC and Yukon), only later to have my “lesser Canada” become “No Canada” after a Civil War a la Spanish Civil War, replaced by, you guessed it, Quebec.

3. “WTF is Canada?”: No change, most likely because the writer either doesn’t think Canada is that important: just another nation on the list, right beside Nepal, Sierra Leone and Tibet that exist; or simply, isn’t interesting and says that the butterflies have no effect north of the 49th Parallel, even if the US became a Neo-Nazi, Commie Hippie, tree hugging dystopia. This, sadly, is the most often seen one, especially on the Alternate History Wikia, the one place I frequent more often than anything else counterfactual historically related.

One of the most notable Canada’s in Alternate History is, once again, from Harry Turtledove. While Mr. Turtledove does add Canada in many of his stories, such as an angry Union attacking the defenseless nation after the succession of the Confederacy in The Guns of the South, one of the most inhospitable territories conquered by the Race (and later given back!) in the WorldWar and Colonization series, the largest involvement in a Turtledove story is in the Timeline-191 (or Southern Victory) series. Six of the multitude of viewpoint characters are either from the north or spent some time there, from farmer/saboteur Arthur McGregor (from my home province of Manitoba, no less!), and his daughter Mary, to American pilot/lawyer Jonathon Moss, whose wife and daughter are killed by a bomb sent to them by Mary. Having a setting in Canada, especially the contrast between the resistant English settlers of the west, and the Quebecois in the east, given their own nation under American “protection” is a nice touch, and one that, as a Canadian, makes me wonder “What if the US did march on Canada?”

Either way, Canada is mostly an unimportant player in Alternate History, mostly due to its proximity to the US, and a much, much smaller population (as of right now, Canada is only a breath away from 35 million: the US is well passed the 300 million mark) and the general feeling Canada is either a “Polite American” or “America’s Hat.” Of course, I can’t say too much bad about the United States, if for the fact that I’m only 20 miles from the border…

Tyler “Tbguy1992” Bugg is a Canadian History Student currently on summer break, and, if he can find time in between video games (ALTERNATE HISTORY video games, mind you), work and such, he tries to write. If he could find a job writing for a video games company for an Alternate History story set in Canada, the world will most likely stop turning for a moment while everyone comprehends it.
Posted by ahwupdate at 11:00 AM