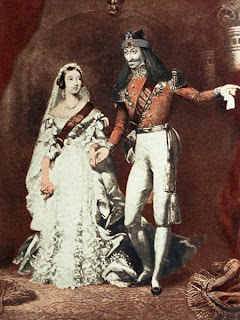 Like many men who have a significant other that enjoys the Twilight franchise, I have been subjected to what counts as "vampire romance" in this day of age.  Despite the RiffTrax commentary that I plug into, I have been unable to escape the sheer banality of it.  So you can guess how happy I was when I found out that Kim Newman decided to take a stake to the recent trends in vampire fiction.  What he gave us is an amusing mystery with some social commentary.

Published in the new, Titan Books printing of The Bloody Red Baron, "Vampire Romance" is set in 1923.  The Central Power have been defeated and Dracula has been exiled to an island where the sun never sets.  This has left a power vacuum in the vampire community.  Elders gather at Mildew Manor to pick the next "King of the Cats", but the Diogenes club would rather the position remain empty.  They have tasked their agent Edwin Winthrop to recruit Geneviève Dieudonné and have her pose as a claimant to observe the proceedings and what influence the costumed criminal "Crook" has on the next vampire king.  If his choice gets elected it could make his criminal organization (and nascent political movement that has similarities with the anti-vampire Nazis in Germany) a threat to the Empire.  Of course all this backroom dealings means nothing to the resident vampire-loving, teenage girl who is convinced that one of the vampires present is her soul mate from a past life.  Add an unexpected murder, a Japanese schoolgirl vampire and an ancient dictator and you got yourself a novella.

The story was very funny and I enjoyed Newman's response to the hunky vampires of the 21st century.  To me Newman's vampires are more realistic then what you usually find in fiction.  Despite their immortality and powers, they are still human.  They can be petty, stupid and vicious...but also loyal, intelligent and reasonable.  The twist at the end when the killer is revealed is also a nice touch, but the entire story probably should have been published outside of The Bloody Red Baron.  After reading about an elder American vampire turning into mist so he could enter a German tank and slaughter its crew only to be incinerated by a giant flame thrower, the more humorous (even if dark) "Vampire Romance" did not mesh with the horror present in the novel that preceded it.  The beginning chapter where Geneviève gets a haircut probably could have been shorter, even if it did set the scene.

Despite some small issues, "Vampire Romances" was a delightful commentary on how horror is presented to the masses and if you do get a copy of the Titan Books printing of The Bloody Red Baron then I recommend that you keep reading into 1923.

Matt Mitrovich is the founder and editor of Alternate History Weekly Update, a volunteer editor for Alt Hist and a contributor to Just Below the Law. His fiction can be found at Echelon Press, Jake's Monthly and his own writing blog. When not writing he works as an attorney and enjoys life with his beautiful wife Alana.
Posted by Mitro at 3:00 PM