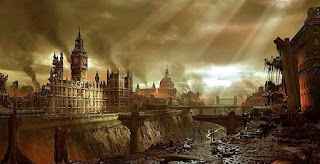 The reason I think we see a lot of Nazis or Axis Win timelines is that there is something uniquely frightening about Nazi Germany existing to the present day. They embodied the dark side of Western civilization and even their very aesthetic produces fear and disgust. Since most Anglo-Americans never experienced life under Nazi occupation, we are left only to our imaginations of what Nazi brutality would have been like in the past and present.

Now there are a lot of stories where Nazi Germany won World War II, but only a few in my opinion that really capture the true level of horror such a result could produce. First, there is The Children's War by JN Stroyar, which is chock full of descriptions of torture and the methodical destruction of entire cultures by the victorious Reich as the rest of the world turns a blind eye. Then you have Moon of Ice by Brad Linaweaver, which features a horrifying vision of a better world from the eyes of the SS. My last recommendation is The Sound of His Horn by Sarban, where humans are hunted for sport.

All three stories sum up the most terrifying aspect of any Nazi win scenario: that when people get to decide who is human and who is not human, everyone suffers.

George Orwell's 1984 holds a special place in the hearts of alternate historians. In many ways its the perfect dystopia that features the power of the state to crush individualism. Since alternate historians commonly believe in the ability of the individual to change the course of history, seeing a society that does everything to prevent the individual from having any purpose is certainly a nightmare scenario for anyone who asks what if. While Orwellian concepts are everywhere in the dark, pessimistic timelines you can find online, its the ones that actually try to find a point of divergence to actually create the world of 1984 that are particularly grim.

I have two great examples for what I am talking about above. The first is Will Ritson's "Images of 1984 - Stories from Oceania" and its reboot "Let's all go down the Strand". Both adopt the theory that everything we hear from the State (including the history of the world given to Winston Smith) is a lie and that Oceania is contained only to Britain, while the rest of the world is fine (more or less). Thus Britain becomes in some ways even worse than North Korea, but what if there really were three mega-states locked in a constant struggle while at the same time crushing any dissent within their borders? That would give us "The Rise of the Tri-State World Order" by SpanishSpy, which shows step by step how a change in history in WWII leads to events of 1984 decades later.

Nevertheless, even in our post-Cold War world, the threat of nuclear annihilation has never gone away and thus reading about what could happen if the bomb did drop still sends a chill down our spines. Some good stories in this setting include Resurrection Day by Brendan DuBois and, for web originals, you got "1983: Doomsday" and "Protect and Survive". None of these stories are particularly scary in the traditional sense, but its the stories they don't tell which are truly shocking.

The ones where someone watches their entire family die, while clean water and food disappear and people become more and more desperate to survive...or else just give up entirely.

Its true that history is full of horrors, so perhaps its pointless to create new ones. That being said, scenarios like the ones above remind us everyday that the history we know could have been a lot worse.