Review: "The Man With The Iron Heart" by Harry Turtledove 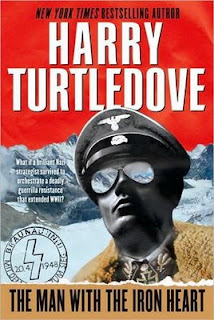 What if the Germans had resisted Occupation after WW2?

Harry Turtledove’s single-volume books are generally better than his massive multi-volume sets. Ruled Britannia, The Guns of the South and In the Presence of Mine Enemies are all excellent reads, although the last one has rather more verbiage than is actually required. The same cannot be said for his massive endless series; the Darkness, Great War and even WorldWar often bogged down into repetitiveness and were just plain boring. They highlight a major flaw in Turtledove’s work; he uses real history as a guide to alternate history. ITPOME has a Soviet-style crisis for the Third Reich, GW has a Hitler-alternate and a mirror image of the Barbarossa Campaign in America (totally unrealistic). With that in mind, I was not particularly hopeful of The Man With The Iron Heart and only bought a copy because it was being sold for £1.50 at Oxfam.

(If that puts you off, don’t bother to read any further.)

The OTL Nazi Werewolves never amounted to very much; indeed, their only major success was the death of a pro-Allied Mayor in an occupied German city. (Paratroopers, not sleeper teams) In ATL, SS Obergruppenführer Reinhard Heydrich survives and organises a resistance movement in Germany, which launches an insurgency campaign within weeks of the Fall of Berlin. Instead of a reasonably peaceful occupation, the Allies find themselves fighting an invisible foe, while back home a woman called Mrs Diana McGuire, the mother of a soldier killed after the end of hostilities – and a thinly veiled image of Cindy Sheehan – starts a major campaign to bring the soldiers home from Iraq…sorry, I meant Germany. Easy mistake to make…

Or at least it is in Turtledove’s universe.

(Oh, and she cheats on her husband as well. I don’t know if Turtledove was making a point…)

The problem is that the world of 1945 is very different from the world of 2003. Germany was occupied by four powers (not two, as in Iraq) and one of the powers (the USSR) had little compunction about using the most unpleasant methods to get information. The US (and British and French) soldiers weren't the soldiers of 2003; the Germans had started the war, the Germans were striking from ambush – they weren’t going to waste time arguing about morality and the Geneva Convention. It isn’t very likely that the public opinion in ANY of the Allies would hesitate over using extreme measures to get information, let alone reprisals and other brutality. The strikes against Britain and France (they knock down the Eiffel Tower) won’t scare politicians out of Germany, but fuel a demand for revenge, even if it is indiscriminate revenge.

And there are plenty of people in Germany who know very well that they were defeated. If the insurgency just made the lives of the ordinary Germans worse – and it would, just because of the problems with food supplies – why would they support it? What about all the German officers from the Wemerchet who wouldn’t want to go through a Nazi Government again? What about all the horrible things the Russians did in their Zone? The West could just point out that if they withdrew, the Russians might decide to move in and take West Germany as well. What happens when the supplies run out…?

I’m not sure what was going through Turtledove’s mind when he was writing. I don’t think, somehow, that it was concerned with realism. Iraq is (would have been) a far different case than Germany, a war fought with different attitudes and tactics, in a very different field. I doubt that the Allies would act as portrayed by Turtledove; insurgencies rarely work without strong outside support and none of the powers that might support one side of the insurgency has a good motive for doing so. The US fought it out in Vietnam, under far worse conditions, for much longer than Turtledove portrayed – I’m not spoiling much to tell you that the book ends with an American withdrawal and the Nazis slipping back into power – and was never really defeated in the field. If the book was intended to portray Nazism and Islamic Fundamentalism as two sides of the same coin, it succeeds…but only barely. Germany might have had thousands of experienced soldiers, but it doesn’t have the tradition of suicide bombers or knee-jerk respect for religious authority.

Overall, an unconvincing book. If it’s intended as a take on the War on Terror, Tom Kratman does a much better job of it.

Two out of Five.