Review: "Land of Hope and Glory" by Geoffrey Wilson 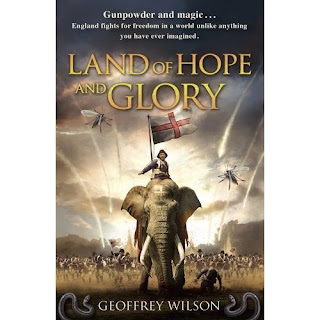 What I enjoy most about reading is that sometimes you stumble upon a book that really draws you in.  Time becomes meaningless and you put aside the real world just to finish the story.  Land of Hope and Glory by Geoffrey Wilson was one those books for me.

The story is set in 1852 in a timeline where the Indian empire of Rajthana rules England and Wales.  The exact POD is uncertain, but the timeline appears to diverge in the 8th century.  Islam spread further into Europe than in OTL.  One character states that England was the only Christian nation left, but this might be a popular misconception since the Pope resides in Dublin and the religious affiliation of various other European peoples is never mentioned.  Nevertheless, England for 200 years was ruled by a Caliph and many English families in the southeast converted to Islam until the English rebelled and deposed the last Caliph.

A period of civil strife follows, which kept the English from uniting against Rajthana when they expanded into Europe.  Like the spread of Islam in this timeline, the scope of the Rajthana empire is never mapped out.  Muslims from France, Andalusia and Naples serve in their European Army, but Ireland and Scotland remain independent.  Scotland is actually a parallel for Afghanistan in this timeline, being a primitive land full of bandit tribes that raid across the border every so often.  There is mention of colonies across the Atlantic and wars against the Inca and the Slavs of the Balkans (probably those bloody Serbs up to no good...again).

Did I mention there is magic?  Plausibility hounds may already be howling, but I like a good ASB story and the magic system is more original than the usual wave your wand and a deus ex machina appears.  Magic comes from an element called sattva and can only be tapped into by the study of yantras, meditation and yoga.  Once you master a yantra you can use it to control sattva  for whatever purpose the yantra was intended, such as shooting a fireball into an enemy troop formation.  There is a catch though, called the law of karma, which states that once you use a power you can never learn another power.  It is thanks to their mastery of sattva that Rajthana has managed to build a vast empire across the world.  With their magical abilities and steam powered machines, known as avatars, the Rajthanans appear invincible.

Until the jewel of their empire, with its large deposits of sattva, rebels against them, mirroring the 1857 Indian Mutiny.  The English soldiers have mutinied and now seek to free their nation from foreign occupation. Our hero, retired solider Jack Casey, has no intention of joining the rebels feeling that it is foolhardy to challenge the Rajthanans.  Turns out, however, that the Rajthanans don't really care what he thinks.  They want him to use his tracking ability, enhanced by sattva, to track down his friend William who is now an important leader with the rebels.  To motivate him, the Rajthanans offer to pardon his daughter, who is accused of helping the rebels and will soon be executed unless her father helps them.  With no choice, Jack sets off with a sadistic Rajthanan officer to find his old comrade while he wrestles with his growing desire to help the rebels despite the insurmountable odds.

As I said before I could not put down Land of Hope and Glory.  I truly felt for Jack as he raced against time to save his daughter, knowing that it could end with the death of his friend and perhaps England's last chance for freedom.  The story tells a familiar tragedy that is found in our history, a proud people fed up with foreign rule, yet doomed before the first fires of independence are lit.  Western culture has had it pretty easy, rarely experiencing the boot heel of oppression on their face, but ignoring or sanitizing it when they do it to other cultures.  There is a dark side to imperialism, no matter how glorious our own histories try to make it.

I truly recommend Land of Hope and Glory and those wanting to learn more about the author can see this article on The New Zealand Herald or tune into Weekly Update when I post my interview Geoffrey Wilson.

Matt Mitrovich is the founder and editor of Alternate History Weekly Update, a volunteer editor for the Alt Hist magazine and a contributor to Just Below the Law. One of his short stories will be published in the upcoming Echelon Press anthology, Once Upon a Clockwork Tale (2013).  When not writing he works as an attorney in the state of Illinois and enjoys life with his beautiful wife Alana.
Posted by Mitro at 11:00 AM