Sounds like the most stupid Conroy novel so far... 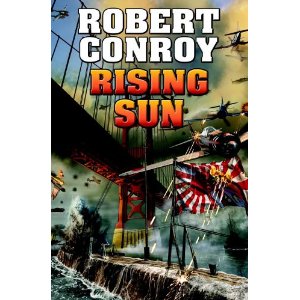 Robert Conroy is busy writing what feels like half a dozen alternate history novels lately, and their quality seems to be sliding down the mountainside if this newest example (to be released in December) is to be believed:

It is the summer of 1942 and what our historians have called the Incredible Victory in the Battle of Midway has become a horrendous disaster in the world. Two of America’s handful of carriers in the Pacific have blundered into a Japanese submarine picket line and have been sunk, while a third is destroyed the next day.  The United States has only one carrier remaining in the Pacific against nine Japanese, while the ragtag remnants of U.S. battleships – an armada still reeling from the defeat at Pearl Harbor – are in even worse shape.

Now the Pacific belongs to the Japanese.  And it doesn’t stop there as Japan thrust her sword in to the hilt. Alaska is invaded. Hawaii is under blockade. The Panama Canal is nearly plugged. Worst of all, the West Coast of America is ripe with destruction as bombers of the Empire of the Sun bombard West Coast American cities at will.

Despite these disasters, the U.S. begins to fight back.  Limited counterattacks are made and a grand plan is put forth to lure the Japanese into an ambush that could restore the balance in the Pacific and give the forces of freedom a fighting chance once more.


Do I really need to go into how mind-bogglingly retarded that scenario (not the loss at Midway itself, mind you, but what follows) is?

I probably will have to. So here's the gist of it in a nutshell: Japan lacks the logistics to pull this off, plain and simple. Getting the Pearl Harbor strikeforce where it was without detection was a major gamble and only worked because it came there to attack, not to occupy. Invading Alaska, of all places? Talk about throwing men into a sink hole. Even assuming the IJN could resupply them - which, given the scarcity of large harbors in Alaska at the time is a doubtful proposition - the relative proximity of US and Allied harbors and the comparably fast time in which significant forces to repel such an invasion could be mustered makes the whole operation look like something a Bond villain would come up. And considering we're talking about the massively defective Japanese Imperial High Command that's saying a lot!

The Panama Canal being nearly plugged? Fine, I can believe that since the Japanese actually planned on doing just that with floatplanes launched from large submarines (which, again, does sound like a Bond villain plot, come to think of it...). 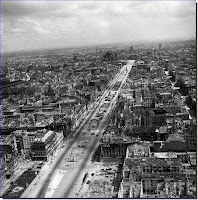 Even if they somehow ended up taking Hawaii, none of their medium and heavy bombers have the operational range to attack the continental US. So, again, I call bullshit on this. Or Conroy having a warped sense of what ripe with destruction meant in WW2. Probably both.

In the end, I'm not sure why I would want to read this novel, even assuming Conroy finally manages to come up with characters that aren't boring or wooden or both. No matter what the Japanese do by late 1943/early 1944 the Pacific will be swamped by a flood of US warships, making the whole POD of the novel moot. Maybe he ends up surprising me, who knows? But I somehow doubt it. Just like Turtledove I think he's past his zenith.

It probably won't be quite as bad as this here, but the description doesn't exactly raise my desire to read, let alone buy it.

War Blogger is the Internet handle of Sebastian P. Breit, author of the alternate history novel Wolf Hunt. You can find news, reviews, and commentary on all matters regarding WW2 on his blog, The War Blog, and follow his writing progress on his personal website.
Posted by Mitro at 3:00 PM