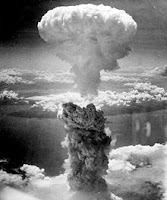 This week is nuclear war themed.  I will be posting a review of the Sidewise award winning novel When Angels Wept: A What-If History of the Cuban Missile Crisis by Eric G. Swedin and interviewing the author himself.  I will also be doing a showcase on one of my favorite online alternate histories: 1983: Doomsday.

We got 2,397 page views for the month of August, a new record!  We also have new first-time readers from Turkey and Myanmar (or Burma depending on your preference).  Welcome!  More importantly, we are only one Facebook fan away from reaching 50 Facebook fans.  If you have enjoyed Alternate History Weekly Update and have a Facebook account, than please help us reach this important milestone.

Last week I discussed a history class at Cornell University that used counterfactuals to teach history.  Well I did not give you the complete story, but thankfully PhD Candidate Irene Vrinte straightened me out:

It is not a regular course, however, but a First-Year Writing Seminar. Cornell offers dozens of these each semester, and all freshmen are required to enroll in two of them. Only freshmen are allowed to enroll, and there is a strict cap on the number of people allowed to enter the course. As a writing seminar, about 50% of my time is spent teaching students writing skills, and during the other 50% my teaching is more content-related. My course is by no means a coverage course in (alternative) history that any Cornell student who wants to can enroll in, as your article on the blog may lead people to think.

She also explained what the class attempts to take a neutral stance on the importance of using counterfactuals in an academic setting:

...although I hope and believe that "imagining otherwise" can help my students further develop their critical thinking and creative writing skills (the main aims of the course), we also read extensively on the counterarguments academics have offered against using thought experiments. In my class we "respect" counterfactual history, in other words, but that does not mean we can never be critical of it.

So there you have it, a description of "What Ifs": Counterfactual History and the American Century that is probably more informative than anything I could write.  Good luck this year Irene and I hope your dissertation goes well.

Have I ever talked about the problems of alternate US presidential elections?  Well the last week has given me several articles that proved my point: it is a very easy way to produce sub-par alternate history.  The character featured in this alternate history debate is President Al Gore.


Brent Budowsky at The Hill produced an argument on why the United States would be better off if Al Gore was elected president in 2000.  Budowsky paints a world in where President Gore prevents 9/11, won the war in Afghanistan by 2003, never invades Iraq, never makes the same tax cuts as Bush, improves the economy and win a Nobel Prize for the environment (for his actions take to improve the environment as President).  The entire article reads like a Gore-wank, where he can magically do no wrong.  Yet consider America's decision to go to war with Iraq.  Steve Kornacki of Salon makes a credible argument that President Gore might have gone to war as well.

Critics of Budowsky's vision, however, make the same mistake that he did.  Bill S at RedState posted a review of Budowsky's article.  With comments such as "rife with silliness", Budowsky implies that President Gore would create a world with a crippled American economy and much worse terrorism problem.  His only support for some of these predictions was a link to an article published by a magazine with a convervative bias, though at least he made an attempt to provide some support for his argument unlike Budowsky.

If you would like to see some other alternate Al Gore, the Alternate History Wiki has a good list.

We have two updates coming out of Fan Expo Canada that should make both comic book fans and alternate historians happy.

First, Andy Stanleigh, Chief Visual Engineer at Alternate History Comics Inc., has informed me that Titan: An Alternate History got a huge response at the Fan Expo Canada and they expect the debut the sequel to Titan in August 2012.  If you would like more information regarding this excellent piece of alternate history, you can check out my review or go to the book's website.

Second, Dan DiDio of DC Comics announced that James Robinson and Nicola Scott are working on a new Justice Society of America book that takes place on Earth-Two.  Prior to Crisis on Infinite Earths, the entire DC universe was divided into an infinite multiverse, but following Crisis that multiverse was replaced by just one Earth to make the DCU more accessible to new readers.  Recent mini-series have reestablished the multiverse


The problem with major comic book companies is that their massive continuity and numerous retcons turns these universes into printed soap operas that are difficult to get caught up if you are new reader or someone who stopped reading comics for a short period.  If you do not believe me, check out this article on Newsarama as they struggle to find a name to call the post-Crisis period.

I mentioned this before, but just a friendly reminder that for any of my readers in the Pacific Northwest, you can meet author S. M. Stirling at Powell's Books at Cedar Hills Crossing, Beaverton, OR on September 7th at 7 pm.  He will be reading from the next installment of the Emberverse series: The Tears of the Sun.  I already have it pre-ordered for my Kindle and I am looking forward to reading it when it comes out this Tuesday.

Review of Island in the Sea of Time by S. M. Stirling at The Archaeologist's Guide to the Galaxy.. by Thomas Evans.

Alternate History Moments in Gaming, 1 at The War Blog.

Imagining the Rolling Stones Without Keith Richards by Ben Ratliff at The New York Times.

That's oil she wrote at The Economist.
Posted by Mitro at 11:00 AM