I want to bring this blog to a personal level and talk to you about how I came to discover alternate history.  This post was inspired by Kier's post.

The exact year escapes me, but I was probably a teenager somewhere around 16.  I was already an avid reader, Animorphs winning me over to the joys of a good book when I was younger.  My tastes were still developing at the moment.  The books I read were from a wide variety of genres.  I was very into Star Wars, however, and I tended to devour anything in the Star Wars Expanded Universe.  I also loved history in school and though I did not know what my future career would be, I knew that history would be a part of it.

That was who I was on one fateful day when I arrived at a book store near the River Oaks Mall.  I had every intention of getting a new Star Wars book that day, since I just finished one in a series and wanted to get the next installment.  Before I could leave with my prize, however, I saw this: 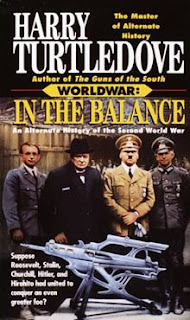 Now I knew enough about World War II to realize that this picture was very, very wrong.  There was no way Adolf Hitler or Winston Churchill would ever take a picture life this, especially in front of a gun that was not a part of the WWII-era as far as I knew.  Intrigued, I picked up the book and checked it out, reading the back and the first couple of pages or so.  An alien invasion during World War II?  I did not think such a story was possible.

Now I have probably been exposed to the idea of alternate history before, likely due to being a huge fan of Back to the Future.  Yet to see it like this...well my young mind could not handle it.  That is probably why I did not buy the book then, but the next time I returned to the store I went straight to the sci fi section and purchased it.

I probably never read a book faster.  For a couple days it was all I did with my free time.  It was an amazing book and completely sold me on alternate history.  Afterwards I began searching for more information about alternate history and continued to read the rest of the Worldwar series.  I cannot help but comment on the detailed sex scenes in the novel, a recurring trope in many early Turtledove works.  In all the books I read up to that point, sex was something they never really expressly talked about, but it was sometimes implied.  I believe that it was at this point that my reading tastes began to mature.

I continued to read nothing but Harry Turtledove, though I eventually began to diversify to other authors starting with The Peshawar Lancers by S. M. Stirling.  I became obsessed with the genre and for a while it was the only thing I ever read.  I soon discovered Alternatehistory.com, back when it was just a hub of alternate history sites with a small forum attached.  Thus began my first foray into the online world of alternate history.

Perhaps my parents became worried with my love of worlds that never existed.  My mom at one point even asked if I ever confused alternate history and real history in school.  Nevertheless, they were happy that I was happy and have always supported my hobby and constantly ask me when I am going to write my alternate history novel.