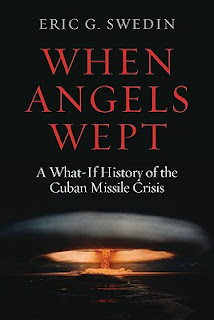 This is probably one of the best alternate history books I have read in a long time. When Angels Wept by Eric G. Swedin deserved this year's Sidewise Award.  It is a plausible and powerful testament to the destructive capabilities of mankind.

The book is unique in that it is not in narrative form, like most alternate histories.  Written as a history book by an American historian living in Australia, Swedin uses OTL sources to explain how and why events took place as they did in this timeline.  Starting with the 1961 Bay of Pigs invasion, we see how the American supported Cuban exiles failed to overthrow Fidel Castro due to President Kennedy's attempts to maintain "plausible deniability".  Fearing another American invasion of their only Latin American ally, the Soviet Union sneaked into Cuba strategic missiles tipped with nuclear warheads and Soviet troops armed with tactical nuclear weapons.

At this point most of the book follows OTL history, with a couple of nuggets thrown in referencing the post-1962 world that reminds you that this did not really happen.  Things begin to change when the U-2 spy plane flight that would have discovered the Soviet missile sites is delayed. When they are discovered Nikita Khrushchev is less willing to pull them out and the confrontation between the United States and the Soviet Union sets off a nuclear war.  Kennedy listens to his military officers recommendations to begin a naval blockade, a bombing campaign and finally a full-scale invasion of Cuba. Unknown to the Americans, however, the Soviet Union had tactical nuclear weapons in Cuba and they have every intention of using them.

Swedin paints a vivid picture of the destruction that followed.  The pages he reserved to discuss the destruction of my hometown, Chicago, could not stop me from picturing the devastation or what might have happened to my own family.  Would Grampy Moran the firefighter, who lived in the suburbs at the time, be part of the futile efforts to stop the blazing inferno from engulfing the city?  Did Grampy and Grammy Mitrovich live far enough away from the blast to survive and lead their family safety?  Sadly I doubt this is a world that yours truly exists in.

Perhaps this book may not be for the casual alternate history fan, especially if they have not read that many real history books to begin with.  That is shame, however, because you are missing out on a novel that reminds this reviewer how much fun history can be.
Posted by Mitro at 11:00 AM