Good news.  Alternate History Weekly Update surpassed 2,000 page views in the month of August, our largest number of page views in a single month so far.  This is an amazing milestone for the site and we could not have done it without fans like you.

This coming week I will be concluding my Back to the Multiverse series (I promise) and I will be reviewing Outrageous Fortunes: a Novel of Alternate Histories by Steven W. White, who I had the opportunity to interview last Friday.  I am also reading When Angels Wept: A What-If History of the Cuban Missile Crisis, the 2010 Long-Form Sidewise winner, and hope to post the review of that novel next week.

Meanwhile, Korsgaard will be presenting another Showcase sometime this week as well.  I hope you guys liked Teramis' Points of Divergence series.  She is taking a break to finish a novel, but she should return with another series in the near future.

The reviews are in on Spike's new alternate history show, Alternate History, and the reviews are generally negative.  Many of you have had the chance to read my review on the first(?) episode of the series, but there are others that you may find helpful.  Sebastian Breit, a.k.a. War Blogger, created an excellent two part video commentary on the episode, which you can watch here and here.  His view of the episode is pretty much summed up when says in Part 2: "and on we go in the march of the stupid".

Other reviews are just as negative.  Shawn P. O'Halloran at TV-Tastic rated the episode a 25 out of 100 and stated "We can only recommend Alternate History in so far as you have to see this for yourself to understand just how stupid it is." Isegoria called the episode "pretty awful".  I have not found any positive reviews, but if you do see one please share it with me.

One can only hope that the complete failure of this episode will convince Spike not to produce anymore episodes.  What is even worse then the episode itself, is that other networks will be even less willing to take their chances on an alternate history show in the future.  Still in case you are a masochist, Spike is streaming the episode on their website for all to view.

Though Spike may have caused us to never trust television with our genre, there is still hope...

Curiosity is a Discovery Channel show that premiered on Sunday August 7, 2011 at 8pm. Each episode focuses on one question in science, technology, and society, such as why the Titanic sunk, and features a different celebrity host. Stephen Hawking hosted the premier episode entitled "Did God Create the Universe?" which aired simultaneously on six Discovery Communications networks: Discovery Channel, TLC, Animal Planet, Science, Investigation Discovery and Planet Green. Season one will feature 16 episodes.

September 4th's episode should be one that alternate historians can enjoy.  The title of the episode: "Is There a Parallel Universe?" The episode will discuss the multiverse theory and the research being done on it.  Whether they will bring scientists from both the pro- and anti-multiverse camps is unknown.  Nevertheless this episode will have a great host, the premier narrator of Hollywood, Morgan Freeman!  I have been watching this show since the series premier and I am very excited for this episode.


Cornell Offers Class on Alternate History
Have you ever wanted to take a class that uses counterfactuals to teach history? Well if you go to Cornell University you can take Professor Irene Vrinte's HIST 1139 "What Ifs": Counterfactual History and the American Century. The course description is as follows:

Speculating on what did not happen (but might have occurred) has long been considered forbidden territory for historians. Some prominent academics have even called studying paths-not-taken a mere “parlor game.” This seminar explores the increasingly popular phenomenon of counterfactual history through the lens of “what if” scenarios in twentieth-century American foreign relations and world politics. We will practice “thinking otherwise” through weekly readings that immerse students in the current debate and help them evaluate theoretical arguments for and against counterfactualism, and we will examine such cases as JFK’s assassination, the Versailles Peace Conference, and the end of the Cold War. A variety of intellectually challenging writing assignments will emphasize critical and creative thinking and ultimately lead to students writing their own piece of counterfactual history.

Some of the required textbooks include Niall Ferguson's Virtual History and Robert Cowley's What If? books.

Well I am very envious of Cornell history students right now.  It is rare that you see alternate history/counterfactuals treated with such respect in the academic setting.  I wish more schools would offer these types of classes.
Coming Soon: In the Event of a Moon Disaster 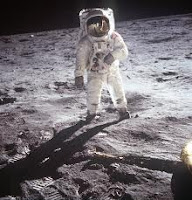 The moon landing was one of the greatest accomplishments of humanity, but what if it went horribly wrong?  That is the plot for the upcoming film In the Event of a Moon Disaster, written by Mike Jones and produced by FilmNation Entertainment. In this alternate history, disaster strikes and the astronauts find themselves up against insurmountable odds. Aaron Ryder will produce the space mission film, and Glen Basner will handle international sales. It will be the largest-budget film so far for FilmNation.  You can find more information about this upcoming film here and here.


Alternate history author S. M. Stirling of Island in the Sea of Time and Dies the Fire, will be in Portland, Oregon (capital of the Portland Protective Association in Stirling's Emberverse series) on September 7th, giving a reading in Powells, Beaverton Bookstore at 7pm.

Wormholes Possible? Yes, And Using String Theory, I Am Also The Pope by Hank Campbell at Science 2.0.

When universes collide, how will we know when it happens? by Chris Lee at ars technica.

The Best Uses of Steampunk on Television by Charlie Jane Anders at io9.

Review of Island in the Sea of Time by S. M. Stirling at The Archaeologist's Guide to the Galaxy.. by Thomas Evans

Review of Virtual History by Niall Ferguson at the Irish Examiner.

Review of Wargame: European Escalation at The Gamers Hub.

Alternate History Posters at Juxtapoz Magazine.
Posted by Mitro at 11:00 AM

Email ThisBlogThis!Share to TwitterShare to FacebookShare to Pinterest
Labels: Cornell, Curiosity, In the Event of a Moon Disaster, Spike TV, Stirling