I present you my interview with Steven W. White, author of the alternate history novel Outrageous Fortunes:

I fell in love with science fiction as a teenager, and have been writing since those days. I earned a B.S. in astrophysics, driven by nothing but a quixotic love of science. That blessed me with a teaching career, but didn't help my writing much. Fifteen years later, I went back to school for an MFA in creative writing.


Alternate history didn't get my attention until I stumbled across the idea of actually traveling from one timeline to another. I've always adored stories of time and space travel, tales of the journey and tales of exploring new places. Tales of escape. I grew up with Star Trek and Doctor Who, Voyagers! and Land of the Lost. I ate that stuff up. Even Robinson Crusoe exploring his island had an impact on me.


There was a lovely television show in the early nineties called Sliders, and while the writers didn't take the series where I would have, that show made its mark on me. Its concept of traveling lurked in my subconscious for almost twenty years, and finally manifested in Outrageous Fortunes.


What is your novel Outrageous Fortunes about?


It's about a quintessential alternate history main character – that is, a historian. He's obsessed with history and brilliant with it, but he's out of touch with his family and can't quite hook up with his true love.


He gets a visit from himself. This "other him" is a physicist who developed (some would say "stole") the technology to travel between timelines via the Superconducting Supercollider (which was never completed in our timeline). The physicist has been dying to share his experiences with someone, and gives the historian a tour of some of his favorite timelines.


Things go downhill fast from there.


The physicist character is actually up to no good. He's abandoned his own world, he's been drifting for years, and he's getting a little multiverse-weary. Ironically, he's chosen the historian's timeline (ours) as the perfect place to settle down.


Just as the historian realizes that his own family, sweetheart, and world are what he really wants, he learns that the physicist intends to replace him. So the historian now faces an antagonist who is as clever and capable as himself, armed with artifacts from countless high-tech timelines, and determined to steal his reality.


What inspired you to write Outrageous Fortunes?


I knew I wanted a story about characters who could travel the multiverse. The plot eluded me until I had the conflict between the historian and the physicist, and that was inspired by a gorgeous short story published in the 1970's by Larry Niven, called "All the Myriad Ways." In that, a detective discovers the psychological impact of "sidewise-in-time" travel: people stop caring about their lives.


Here's what Niven meant. If there are countless versions of you, in which you are rich, royalty, president, poor, imprisoned, quadriplegic, and dead... what's the point? They are just as real as you are. So why bother sweating over a tough decision? Why bother doing the right thing?


In other words, once you get really get your head around the multiverse, you become a nihilist (Niven is not a fan of alternate history, if that's not already clear).


I couldn't make up my mind about whether I agreed with Niven or not. So I made the physicist go one way, and the historian go the other, and that difference drives the conflict of the novel. These two characters share the same DNA, but it turns out, they couldn't be more different.

I also read Niven's short story and with all of the research/speculation about whether a multiverse actually exists, would we see an outbreak of nihilism/murder/suicide if tomorrow the multiverse was actually discovered?

Let me put it this way. Physical confirmation of the multiverse would be the latest in a long list of blows the human ego has suffered in the last few centuries, starting with heliocentrism. As it stands now, we are merely tool-using primates who have, for a blink of geologic time, occupied a small planet orbiting an unremarkable star in a mundane galaxy. With that historical context, the discovery of a plurality of universes doesn't seem like such a stark revelation.

On the other hand... reading a science book and standing over your own grave are two different things. How many versions of yourself could you meet before you got weirded out by it? What would that do to a person?

If you could travel the multiverse yourself, what timelines would you like to visit?

I love that question! Of course, we have to visit the dystopian worlds – the radioactive wastelands, the Kafkaesque tyrannies, the global battlefields divided between the Vikings and the Huns (or whoever). We would struggle to find out what went wrong, as we often do when considering our own history.


And we can't miss the utopias (although these are harder to write) – I remember Carl Sagan, in his Cosmos series from 1980, dreaming of a world in which the Greek tradition of science that started in the era of Democritus never died out. He imagined twentieth-century interstellar spacecraft.


Outrageous Fortunes doesn't go quite that far, although there is a space elevator.


Finally, there's an aspect of traveling the multiverse that is too often neglected by writers, and that is the wonderful notion of picking up things along the way. I'm obsessed with out-of-place artifacts, including real-life candidates like the Voynich Manuscript and the Antikythera Mechanism. One of the glories of alternate history as a genre of fiction is that it allows for so many dazzling scenarios, such as cruising over villages of tribal dromeosaurs in your flying car, or having your sexy robot bodyguard defend you from ornery Chumash Indians.


The physicist in Outrageous Fortunes wears a photographer's vest with dozens of Velcro pockets, and you have to wonder what all he's got in there. That vest provides plenty of surprises throughout the novel.


How did you come up with the title?


It's from Hamlet's famous "to be or not to be" speech, where he's agonizing about whether the struggle against Fate is really worth the bother. Is it worth it to "suffer the slings and arrows of outrageous fortune"? My novel considers the same question, with a new wrinkle: there are many fates, and you can choose. Would you choose the life you have? Or would you abandon everyone and everything to live somewhere else?


Shakespeare's expression was perfect – I just pluralized it.


Who designed the cover? 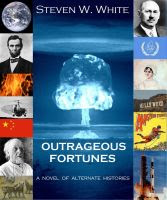 Me. I wanted to blend familiar elements that would spark recognition (Abraham Lincoln, the Apollo 17 shot of Earth, the Chinese flag) with less familiar ones that would arouse curiosity (Robert Goddard, Tsiolkovsky, and Jane Austen). All these figures, in one way or another, cast a shadow onto the novel's plot.


Those are dire wolves in the lower left corner, by the way.
What are you reading now?

The Land that Time Forgot, by Edgar Rice Burroughs. I eat a lot of non-fiction: Influence, by Robert Cialdini, and The Writer's Journey, by Chris Vogler. I also keep up with J. A. Konrath's blog about publishing.


What are your current projects?


My second novel, called New World, became available last month. It's not alternate history – I'd call it historical fantasy, or "frontier fantasy" if I can invent my own genre. After seeing so many fantasy novels drawn from tropes of European folklore (including Lord of the Rings and all that followed it), I wanted to set a story in a world drawn from American folklore. You might not think that there would be enough material, but there is.


Do you have any new alternate history books you are working on?


I'm pleasantly surprised by the success of Outrageous Fortunes, and some fans have suggested a sequel. There are definitely characters in it who still have some adventures ahead of them, but with my schedule, it may be a while.


Do you have any advice for other writers, especially on publishing a novel?


The era of Gutenberg was nothing compared to today. The rules are changing. Lucky for us, we science fiction writers understand technology-induced social upheaval, and know better than to be afraid of it. My advice is to pay attention and enjoy the ride.

If you guys learn more about Steven W. White you can check out his blog Novel Dog.  Non-Kindle users can also get a copy of Outrageous Fortunes at Smashwords.
Posted by Mitro at 11:00 AM