There were several good maps these last couple of weeks, but after reading the description for this one below, I was finally able to pick today's featured map. 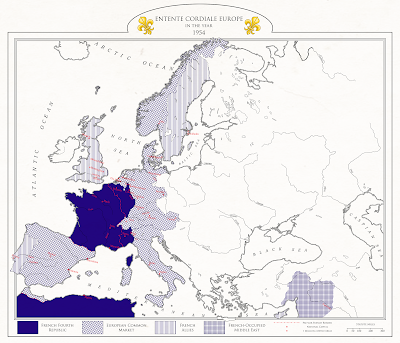 This is "The Great Entente" by long-time Map Monday alum Lynn "ToixStory" Davis. Created for AlternateHistory.com's Random Bouts of Cartography contest, Lynn says she created the map after being given the color blue and the theme fascism. Reading more into the description and you learn this is actually an alternate history of Harry Turtledove's Timeline-191 or Southern Victory series.

Although the CSA and the rest of the Entente still lose the Great War, overly pious Gordon McSweeney survives the war and goes into politics. He leads a fascist, extreme Christian political party to the White House and allies with the defeated Entente powers, due to his dislike of Germany. This isn't actually that much of a stretch, especially when you learn many fans of Timeline-191 suspected that Turtledove originally planned for the United States to lose the Great War and have McSweeney be the Hitler analog instead of Jake Featherston.

Anywho, the second Great War happens and the new Entente is victorious. As you can see from the map, France became the leading power of Western Europe and directs the region between the multi-polar Cold War with the United States, Russia and Japan. Of course, the map is great. Its minimalist, but there is definitely attention to detail. Another excellent map by one of our premier alternate cartographers.

Honorable mentions this week go out to "The Ukraine War" by JoeyB2198, "Map of the Submarine Telegraph Between America & Europe" by CourageousLife and "Romania Mare" by Nanwe.