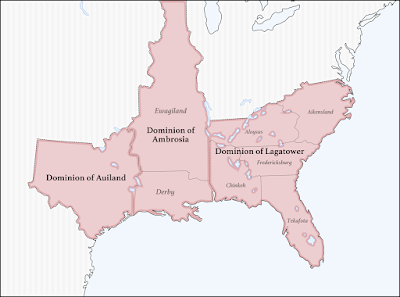 Alternate linguistics are hard, quite possibly one of the hardest things to do when making a map or a timeline. You have your map done, your borders ready, but how in the world do you come up with proper names that won’t get the thousands of viewers on the forums infuriated? Even as someone who’s made maps for a year now, it’s still really difficult to think of the proper names needed for an area. Sometimes I find myself asking, “How do these experienced mapmakers come up with such unique names, with such clear reasoning behind them?”. Hopefully, with the tips and resources I’ve laid out here, I can make that process a little bit easier for the both of us.

Step 1 - How Many Butterflies?

In this “tutorial”, I’ll try to demonstrate how to pick good names for towns, colonies, and even entire nations in your alternate history scenario. I’ll mostly be focusing on how to come up with a name for a nation, and how to adapt them colonially. The first thing to think about when making alternate colonies or nations is what your PoD, or Point of Divergence, is. Most people think of their Point of Divergence before they consider all the names of the countries, but others work their way backwards. Either way, you need to make sure that the names that you choose aren’t anachronistic. One of the major flaws from my earlier AH works was that I translated names from OTL (Our Timeline) into another language, or simply kept the names as they were. So, how do we figure out what’s gonna change? If you start diverging events before Columbus (or his equivalent) discovers America, for example, most things in the New World are probably going to be different. The names of the continents probably won’t even be the same! With a 1700’s PoD, things like the US territories and maybe even countries in South America would be completely different (and that’s not even getting into the African and Australian names!). Try to consider that when putting focus on plausible alternate history names.

Okay cool, so now you know not to be convergent in your names! Hey… speaking of names, when are we going to get to making those? Finding resources for your alternate names is probably the most important part of all this, because without any sources you can’t, well, make the names. When looking up good source material for your place names, you’ll want to find something relevant to the area at hand. Let’s say you want an alternate Inca Empire, but the PoD is in 400 AD. Darn, the term Inca didn’t even exist back then! In such a situation where there’s no real definitive name, you’ll want to use a word from the native language of the area, something that describes the entire region like Tawantinsuyu does. In this case, Quechua probably didn’t evolve to its recorded form until European contact. Sadly, there isn’t much documentation of early Native American languages, so I normally take words from the modern day dictionaries. You’ll want to go to the search engine of your choosing, and type in something along the lines of “[LANGUAGE HERE] words”, or “[LANGUAGE HERE] dictionary”. With “bigger” Native American languages like Quechua, there’ll probably be a few pages that come up with hundreds of words each.

I’ll be giving some resources at the end of the article, feel free to skip to the end anytime if you need to use them.

After a few minutes of searching, I found the Quechua word “wasi”, meaning house/shelter (or an alternative, “wasi-nchis”, meaning “our house”). Sounds like an okay start to an alternate nation! Maybe you can use “chief” as a root, or “nation”. I tend to use words like that when making nations out of the Celts or Germanic tribes. When there’s no major identification for an area, you might need to take a descriptive word from their language and apply it to the culture. Words regarding the environment or climate might even work best, just experiment a little with names that fit well! Obviously, not all nations are named after deserts and homes, so try to pick stuff from your nation’s history to add more to your name! Have a weird Greco-Roman king named Athrymus in your TL? Maybe make a Greek colony named Athrymia! In the case of my little alt-Inca empire, Wasi-nchis is okay, but feel free to spice things up!

Once you have your dictionary of Quechua, Shawnee, or Proto-Germanic words, it might be hard to find a use for them, especially if your country is a colony. You may want to use Wasi as the name of an Incan state, but what if it comes under Spanish rule? What then? To find out how names like Wasi-nchis would be colonially adapted, one needs to look at exactly how Europeans named their colonies OTL. In short, it was rather abrasive, commonly using non-descriptive native words adopted into European languages. Sometimes, like with the town of Schenectady, New York, it might be adapted from the actual name of the settlement, as the Dutch did with the native Mohawk town of Skahnéhtati. In a case like that, the Wasi example I gave might simply be changed to sound more “Spanish”. Maybe some translators manage to find out that the word Wasi is the Quechua word for home, leading them to name the colony “Hogar”. Maybe the Spanish simply hear the phonetics of the word, spelling it with a Spanish flair. Something like “Ouasinechís” would work!

Another method would be to name the colony after something you’d hear the natives speak about in conversation, like the Quechua words for “white men”. If the Spanish don’t understand the language, they might just use anything they believe to be directed at them. The simplest method, and probably the easiest, is to take the name of an explorer and apply it to the colony (but it’s not as fun >:c). This works for any colonizing nation, be it the English, the Spanish, or even the Inca themselves. However, sometimes it can get difficult to make something “sound English”, especially if you aren’t too experienced with phonetics (much like me).

IPA stands for “International Phonetic Alphabet”, and it’s essentially a list of all possible letter sounds that could be made by the human mouth. Most of the sounds are used in various languages, but none use all of them. To see what all the IPA letters sound like, check out this link. Even letters you didn’t think had multiple sounds can be split up into many! The English language uses around forty of the 163 letters, varying from dialect to dialect. If you want to adapt something extremely foreign into a language like English, you might want to try translating the IPA not used in English into something that is.

To be honest, IPA doesn’t come into my naming procedures too often, unless I’m really stuck about how to get something to sound right. Normally, I tend to listen to the word out loud, and spell it out how a native English speaker would spell it. However, if you end up wanting to translate it into Spanish or some language you’re not particularly good at spelling in, it might just be less risky to translate the IPA. Sometimes it might not come out entirely right, but hopefully these tips have helped you a bit.

One of the largest notes to add is that there are plenty of bastardizations in my names. To give another short example: If I end up using Wicawa nunti, the Catawba word for Moon, as the root word for my English colony in Carolina, it might be difficult to find something that LOOKS English. Sure, I could translate the IPA and even write it down phonetically, but it’ll still look something like “Wicawanuntee”. Firstly, that’s far too long, and it doesn’t exactly look like a proper English colonial name. Maybe the person who named it chose not to use the exact word, choosing a word in his native language that sounded similar. Walnut and Wanunt are similar, right? Shortening it also works, going from Wicawanuntee to simply Cawanunta. Still a bit “native”, but far more realistic. Ultimately, the best names come from putting yourself in the person who chooses them. Appropriation is terrible, but it’s how colonial names were found, as sad as that is.

So yeah, that’s my quick tutorial on how to find names for things in your althistory timeline! It went more into colonies than I had hoped, and probably too Eurocentric, but hopefully it wasn’t too hard to follow! Thanks for reading, here are some language dictionaries as a reward! :D

Glosbe (Short-ish dictionaries of languages NOT on Google Translate) - https://en.glosbe.com/en/

Nativelanguages.org (While the dictionaries up top all have hundreds of words for a single tribe, these have the basics for LITERALLY EVERY TRIBE) - http://www.native-languages.org/