No more tears: History finds a place to let its hair down in the alternative universe 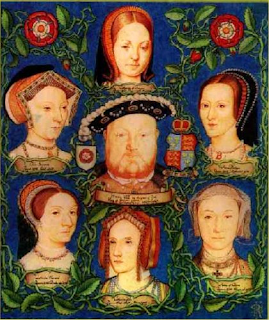 I started reading Tudor historical fiction at the age of twelve, back in the early 1970s; I read everything about Henry VIII’s six wives that I could get my hands on.  I made my way from Jean Plaidy to Norah Lofts to Margaret Campbell Barnes to Margaret George and back again, and more.  I was enthralled by the drama and tragedy that I read, over and over again.  By the 1990s, however, I was burnt out on the harrowing canon of Tudor fiction.  I’d sighed all the sighs I had for the famous sextet, and cried all the tears.  I was done.

All that reading taught me a lot about Tudor legend and lore.  To be sure, I got it about Katherine of Aragon’s consummation and religious dilemmas, the Anne Boleyn vixen versus victim conundrum, and how poor Jane Seymour couldn’t possibly be as boring as she seemed, or could she.  I got that Ann of Cleves might have rocked rejection, that lightweights like Catherine Howard have feelings too, and that even for smart girls, hormones eventually will out, as they did so tragically for Henry VIII’s last wife, Katherine Parr.  By the time Hilary Mantel and Philippa Gregory came along, I just didn’t have it in me to read another piece of Tudor fiction.  I might never know what I was missing, but there it was.

I embarked on a decade or so of Tudor non-fiction history reading after this.  I wanted to sort out the big questions, the ones that couldn’t possibly be as ‘surface’ as they seemed, for myself.  I wanted to know who the bitches really were, who the whores really were, just how noble the noble ones were exactly, how wise the fools actually were, and how foolish the wise ones could be.  And of course, there was the ultimate question; who did Henry VIII really, other than himself, love the best?  Surely, the real answers were arcane, and buried deep.   David Starkey, Antonia Fraser, Carolly Erickson, Alison Weir and other awesome historians helped me to find my way to my own understanding of the Tudor era’s six most fascinating spouses.

I concluded, after all that reading, all that emotion, and all that thought, that it probably was pretty ‘surface’ after all.  Katherine of Aragon really was the prototype member of the First Wives Club; Anne Boleyn, whether you were a fan girl or not, was ruthless.  Jane Seymour, whatever her virtues, won the least fascinating award hands-down.  Ann of Cleves was bounced, but bounced back. Catherine Howard, while she certainly had her reasons, slept around, whether you liked to think about it that way or not.  And poor Katherine Parr just couldn’t win for losing, even after four times at bat.

I’ve always found that when you’ve cried all your tears, thought and thought till you were going around in circles, and shot your bolt, so to speak, there is nothing left to do but laugh.  And that is exactly what I decided to do when I dipped my big toe into the pool of Tudor fiction.  It didn’t take me long after that to cannonball into the comedic drink with my first novel, Six of One.
There is no laughing at the stories of Henry VIII’s six wives if you take them straight up.  Betrayal, death, agony, rejection, adultery and abuse are not the stuff of humor.  Alternative history was the only way to create a story about these women in which one could do with them what virtually no other Tudor writer has done:  to laugh with them.

The ‘alternate’ part of alternate history allowed me to fashion stories for each of Henry VIII’s wives that allowed her to, in some way, shape, or form, get over on Henry.  In my fancy, each wife was taken from the victim status designated her by general history, or the dregs of turgid, tragic dignity that could be drummed up for her in fiction, and elevated to last-laugh,’ gotcha’, victor status.  It was heady stuff for a writer.  I laughed with my six favorite historical figures as, together, we gave Henry VIII six metaphorical, commedia dell'arte kicks in the backside.  Along the way we sent each other up, dished, snarked, preened, whined, punned, and, letting bygones be bygones, high-fived each other.  We turned history on its head with a little comedy, a little time travel, lots of girl-power, and a bit of imagination.

The ‘history’ part of alternate history kept me on the straight and narrow.  I made carefully sure that my speculative Tudor flights of fancy were grounded in solid research and, were, if not probable, fully plausible for the average Tudor fan.

Reader reviews tell me that world is pretty sharply divided on the comedic, speculative approach to the story of the Tudors, or perhaps to history in general. People seem to either love it or hate it. Those who love it often use the words ‘laugh out loud’ when talking about Six of One, and that, to me, makes it all worthwhile.  At last, Henry VIII’s wives can give up sobbing and sighing for all eternity, and let their hair down and have some fun.

My experience with Six of One emboldened me to create a sequel, taking on the latter day Tudors and a couple of new Renaissance sacred cows, Kit Marlowe and William Shakespeare. Seven Will Out, as well as Six of One, are available on Amazon.com in paper or electronic format for the Renaissance history fan who is looking for something a little¬–okay, a lot–different.

What do you think about the place of humor in historical and alternative fiction? Is there a historically well-grounded but humorous novel in France’s former first couple coming to terms with Napoleon’s short-man syndrome and Josephine’s ‘hot pants’, in the morass of old-time Papal politics, or in the American Revolution?  What would the heavy-hitters of Yalta or Versailles read like off-the-record and with a few drinks under their belts?  Is the enduring popularity of George McDonald Fraser’s hilarious but historically accurate Flashman series a flash in the pan, or is the public ready for more in the same vein?  What are your thoughts?

JoAnn Spears is a semi-retired, Master's Prepared RN pursuing a second career/hobby gone wild as an author of speculative historical fiction with a humorous bent.  Her first two books are about the Tudors, and her next book is still a twinkle in her eye.  When not writing, JoAnn is in her flower garden, teaching Yoga in her Methodist church basement, watching old black-and-white movies, cooking, or embroidering reproduction samplers in  the beautiful mountains of Upper East Tennessee.
Posted by Mitro at 11:00 AM

Email ThisBlogThis!Share to TwitterShare to FacebookShare to Pinterest
Labels: 5 Years, Guest post, JoAnn Spears, Seven Will Out, Six of One, Tudor