I haven't featured anything by Lynn "ToixStory" Davis in a while, so I was happy to see that she had a good week last week. She was interviewed on Odyssey Online by Alex Wallace and her newest map was well-received on social media: 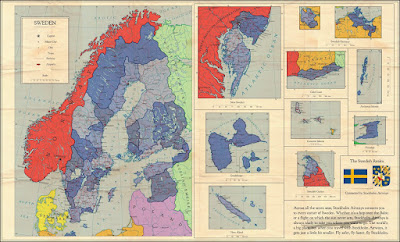 This is "The Land of Eternal Twilight" (full size here) which was based on a request from Tardis218 and colonial names were provided by a Anton Larsson. It features a Sweden that came out of the Thirty Years War strong enough to remain an important player in European politics (without the help of West Virginian time travelers). I especially liked Sweden's unorthodox colonial empire, which treated the colonies as equal members of the Swedish government, which probably explains why they held onto so much of it after decolonization set in.

The map itself has that realistic style that I love and the colors are easy on the eyes (I also enjoy the color blue for some reason, so this map met that need). The airship in the background of the text is a nice touch as well and I don't get the feeling Lynn was just being lazy when she included it, unlike others I could mention. Another good map from a great alternate cartographer.

Honorable mentions this week go out to "The End of an Empire" by Zek Sora, "America at the Start of the 1870s Before the Last Great Period of US Expansion" and "Super Scythia World" by Bruce Munro.