Lets Look At the Alternate History of Homefront: The Revolution

A couple days ago, Deep Silver and Dambuster Studios released the official trailer for Homefront: The Revolution. For those who don't know, the series began with the first-person shooter Homefront, which featured a near future dystopia where North Korea occupied most of the United States. The new game, however, is taking the story in an entirely new direction and has created an alternate history. According to the press release:

"The core premise of Homefront - an occupation on American soil - remains unchanged," said Hasit Zala, Game Director at Dambuster Studios. "But we have created a brand new fiction that offers a very different interpretation of how we got there."

We learn about this new fiction from this mockumentary and this timeline where you need to enter your age to get in. The point of divergence seems to be that North Korea is decisively defeated in the Korean War, which removes the communists and installs a democratic capitalist government. Why this doesn't end with North Korea being reunited with South Korea is anyone's guess. There are other changes as well, for example, the Soviets landing men on the Moon first (and surviving into the 21st century) and John McCain being elected president in 2008.

The true alternate history, however, is that "Steve Jobs" was born in North Korea. He ended up creating revolutionary technology, formed the powerful APEX Corporation and devised a theory about using technology to bring about peace, stability and all that jazz. After he died, his son takes over the company, gets elected Premier of North Korea and essentially merges the state and corporation into one entity. Desptie its size, North Korea is pretty much a global superpower at this point.

Meanwhile the United States becomes increasingly dependent on technology and financial assistance from North Korea, especially with its seemingly endless war in the Middle East (which includes a nuclear attack on Riyadh in 2016). Sadly the United States economy tanks and it is unable to pay its debt to the North Koreans. The Premier acts and shuts down all the technology the United States bought from Apex. The first troops to arrive come with humanitarian aide, but then the real occupation begins. 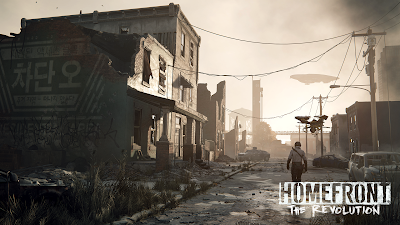 And if you look at the above picture, you can see an airship, because how else will people tell this is an alternate history without an airship?

So yeah this still is a North Korea wankfest like the first Homefront game, just without the communism. In fact, don't you guys get the feeling that the North Korea in this timeline is just an evil South Korea? South Korea in our timeline is already a major technology hub and dominated by massive conglomerates that influence the government. Isn't that what APEX is? Was the bad guy always supposed to be South Korea or a United Korea, but they changed it at the last minute so as to not to upset a potential market, like they did in the remake to Red Dawn? Or did they just really want North Korea to be the bad guys, regardless of how little sense that made? I'm going with the latter actually.

While I obviously haven't played the game (and probably never will) I will say that I am not impressed at all by the alternate history. It turns North Korea into an evil South Korea and still stacks the deck in their favor to allow them to invade and occupy a nation over 80 times its size  (I checked). Maybe the gameplay will make Homefront: The Revolution worth it, but the world-building is just awful.