Being partly Serbian, I am always curious about alternate histories involving the former Yugoslavia. The popular scenario is to have the different ethnic groups work out their differences sometime in the 20th century and still be a unified state by the present. A twist on this theme, however, is the "Kingdom of Illyria" by Keperry: 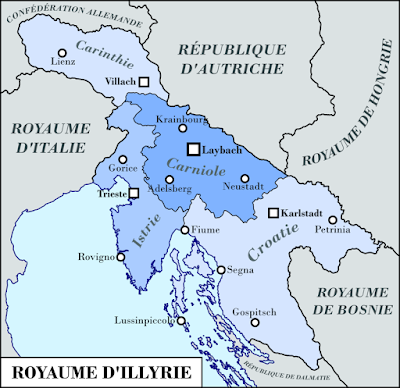 In this timeline, Napoleon dies at the height of his power leaving his empire to continue on for a short while before collapsing as one by one all the Bonapartist states overthrow their monarchs, except for Kingdom of Illyria. They are the Byzantine-esque successor state to Napoleon's empire, pushing a version of Napoleon's ideology to keep the loose federation of Croatians, Germans, Italians and Slovenians together. In the scenario that went with the map its mentioned that the Kingdom already lost the southern half of its territory, so I am assuming places like Bosnia, Serbia and other Yugoslav states were included as well in this kingdom.

As I said before it is an interesting twist on the concept of Yugoslavia, whether Keperry intended it to be or not. Although its doubtful such a kingdom would survive for long in its timeline, at least it gave us a nice Inkscape map to look at. Not bad for Keperry's first MotF entry.

Honorable mentions this week go out to "Let's Split: the End of the Kingdom of Belgium" by Iserlohn and "Ulster Rising: Irish Alt History in a shade of Orange" by KapiTod. If you want more mappy goodness, check out this 1937 map imagining how Japan might attack the west coast of the United States, via Slate.

Matt Mitrovich is the founder and editor of Alternate History Weekly Update, a blogger for Amazing Stories, a volunteer interviewer for SFFWorld and a Sidewise Awards for Alternate History judge. When not exploring alternate timelines he enjoys life with his beautiful wife Alana and prepares for the day when travel between parallel universes becomes a reality. You can follow him on Facebook, Twitter and YouTube. Learn how you can support his alternate history projects
Posted by Mitro at 3:00 PM