Weekly Update #228! Production on Season 2 of The Man in the High Castle has Begun (and more)

I really should ditch Blogger. I have been having issues with it for a while now. For example, the link preview function on Facebook won't work for Blogger sites. Meanwhile, the tool that Blogger provides to search and automatically embed YouTube videos doesn't always work, especially for videos with small view counts. Furthermore, when saving, random bits of HTML code will appear causing formatting issues and forcing me to spend time fixing it. I'm not sure if/when I will make the switch, but I am losing my patience.

For those who don't know, I have been working as a volunteer interviewer for SFFWorld. My first interview with Lou Antonelli ("Great White Ship", Another Girl, Another Planet) was recently published and my interview with Alan Smale (Clash of Eagles trilogy) will be published soon.
Now I have the opportunity to interview Taylor Anderson (Destroyermen series). Are there any questions you would like me to ask Taylor? Let me know in the comments or email them to me at ahwupdate at gmail dot com. 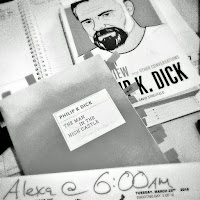 TV Series Finale reported that production on the second season of Amazon's smash alternate history hit, The Man in the High Castle, has begun. It appears the news first hit the web when Alexa Davalos, who plays Juliana Crain in the show, shared the following tweet, which included her call time to the set.

So what can we expect from Season 2? Well Den of Geek has been compiling news about the upcoming season 2 and Frank Spotnitz has been quite clear that we will be seeing places outside the Pacific States and the Third Reich. Although many have interpreted this to mean places like Russia, considering the last scene of season 1 showed Nobusuke Tagomi in the 1960s America of our timeline, perhaps it is more of a matter of going sideways to find new locations to excite viewers.

At this point its mostly just speculation, but as the year goes on, expect some more concrete ideas regarding what direction the show is going.

Pic of the Week

Last week I got seven books delivered to my office for the Sidewise Awards. Here was my favorite delivery: 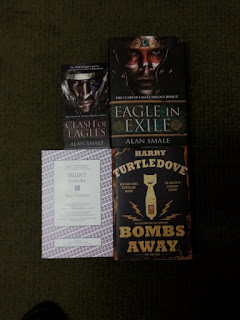 Expect a review of Clash of Eagles soon since I am currently interviewing its author and I wanted to read the book while I interviewed him. In the meantime, you can check out my review of Rachel Caine's Ink and Bone, which is another book being considered for the Sidewise Award.

I had intended to publish this on Wednesday, but due to a technical screw up I had to post it on Sunday. Anywho here is the next edition of AH 101 where I talk about Space-Filling Empires:
Alana and I still want to post some vlogs on 11.22.63 and Outlander Season 1. Plus with the new season of Game of Thrones coming out soon, I decided to do a review on George RR Martin's Doorways, the alternate history television show that predates Sliders, but never saw the light of day. It should be fun to do and I hope you all enjoy it.

Also, don't forget to check out my recent article for Amazing Stories where I list my 6 favorite YouTube channels for history nerds.