The Age of Lovecraft edited by Carl H. Sederholm and Jeffrey Andrew Weinstock

Howard Phillips Lovecraft, the American author of “weird tales” who died in 1937 impoverished and relatively unknown, has become a twenty-first-century star, cropping up in places both anticipated and unexpected. Authors, filmmakers, and shapers of popular culture like Stephen King, Neil Gaiman, and Guillermo del Toro acknowledge his influence; his fiction is key to the work of posthuman philosophers and cultural critics such as Graham Harman and Eugene Thacker; and Lovecraft’s creations have achieved unprecedented cultural ubiquity, even showing up on the animated program South Park.

The Age of Lovecraft is the first sustained analysis of Lovecraft in relation to twenty-first-century critical theory and culture, delving into troubling aspects of his thought and writings. With contributions from scholars including Gothic expert David Punter, historian W. Scott Poole, musicologist Isabella van Elferen, and philosopher of the posthuman Patricia MacCormack, this wide-ranging volume brings together thinkers from an array of disciplines to consider Lovecraft’s contemporary cultural presence and its implications. Bookended by a preface from horror fiction luminary Ramsey Campbell and an extended interview with the central author of the New Weird, China Miéville, the collection addresses the question of “why Lovecraft, why now?” through a variety of approaches and angles.

A must for scholars, students, and theoretically inclined readers interested in Lovecraft, popular culture, and intellectual trends, The Age of Lovecraft offers the most thorough examination of Lovecraft’s place in contemporary philosophy and critical theory to date as it seeks to shed light on the larger phenomenon of the dominance of weird fiction in the twenty-first century.

How far would you go to be with the person you love?

Sander Jorve just wants to keep his wife and son safe. Living in the brutalized lower class of Lantern City means living in near constant darkness, the enormous walls of the city always looming overhead, while the upper class enjoys the elevated, interconnected towers and airships above. When Sander’s brother-in-law, the persuasive activist Kendal, convinces him to infiltrate the brutal ranks of the Guard, he’s set on a dangerous path that will test his abilities and beliefs, all in the name of making a difference for his family and his caste.

From the writings of Jules Verne and H.G. Wells, to comics like The League of Extraordinary Gentlemen, and Lady Mechanika, the detailed and imagination-fueled steampunk movement has excited fans worldwide. Set in an original, sprawling steampunk world, Lantern City explores everything we love about the genre and what it takes to change a person’s place in the world.

Conceived in Liberty: A comedic, time-traveling romp in America's monarchy by Don Canaan

What if a fate worse than the Zika or Ebola viruses threatened our lives in the monarchy that was founded after the USA was stillborn?

After Benedict Arnold defeated George Washington's ragtag revolutionary army, he was appointed governor-general of a British puppet nation, the Union of Royal American States. Later he was crowned King Benedict I.

In 2063, the ruler of the URAS was Queen Alyssa, whose family descended from Benedict's distant cousin, King Abraham I. The family had always ascended to the throne by murdering its previous ruler. In this case, Alyssa killed her father.

The paranoid queen's nightmares contained undocumented aliens trying to usurp the throne and enslave her subjects.

In this comedic, sci-fi, time-traveling romp through history, the queen asks a young scientist, Tamar Weaver, the founder of AT&T, to travel into the past and repair the fabric of time so that Alyssa's reign could continue unhindered.

During her adventure in 1863 in the royal capital of New York City, Tamar experiences hardships and joy that she believes caused a rip in the fabric of time.

Changing fate is not so simple for Tamar. She encounters historical figures in non-whitewashed situations that have never before been documented.

Traveling into the past causes Tamar to automatically lose 17 years and once again she has become a virgin. Her journey is fraught with assassination, sex and a life transformed.

The mind-boggling plot concludes with an ending that the reader could never imagine (unless he/she has read the last page).

If you're prudish, a historical hardhead, stubborn, a curmudgeon without a sense of humor, you shouldn't read "Conceived in Liberty" because you won't enjoy it.

But if you're not the reader for whom historical knowledge must be rigid and compartmentalized, then you'll surely enjoy this exciting stand-alone novel, waiting for sequels in the ripples of time.

The Wild Cards universe has been thrilling readers for over 25 years. David D. Levine's "Discards" introduces Tiago Gonçalves, a teenager who scrapes collecting recyclables from the landfills of Rio de Janeiro. But after the Wild Card virus infects him, he learns to build something more.

The Roman Empire, arisen from the ash and ice that covered the world after the wrath of the gods fell from the heavens, must confront an ancient evil that threatens the entire known world…

Publisher's Note: Make sure to visit the author's web site for a special offer available *only* to pre-order customers!

A few thousand years after Old Rome was destroyed, the dream of the Roman Survivors had become a reality. Vulcan’s Fury, as the impact event was known, had become a distant but poignant memory of how wrathful the gods can be, and it was the duty of every Roman to see that they were never angered again. Over those many years, the Roman Empire had finally brought to heel the entire known world, save the Dark Lands. Hidden behind a barrier of smoldering volcanoes and the deadly Haunted Sea, the Dark Lands were at the heart of ancient legends among the Romans of terrible beasts, and worse, that had once feasted upon the flesh of men in the earliest days of the First Spring.

But ancient legends held no fear for Princess Valeria, daughter of Caesar Tiberius Claudius Augustus. Enthralled by reports of strange happenings along the coast and bored by the life of a young Roman noblewoman, she begs her father to allow her to travel to the coast of the Haunted Sea to indulge her curiosity. Tiberius grants her request, anxious to see her safely away from Rome, where the Senate is plotting against him. Together with her closest companions, including her enormous hexatiger, Hercules, Valeria sets off on her adventure, unaware that she has set in motion a series of events that will change the history of the Empire, and all Humankind, forever…

The Yorkshire Biryani by Vikram Venkataraghavan

Steve Wilson and Margaret Wilson, are an aging British couple with traditional British values, considered by most as backward in a modern British society. Their first son Greg is wayward and disorganized, much to Steve’s dismay. Greg wants to be a Kusthi champion and one day represent his country on the world stage.

Daphne, the daughter of the household is 27, and is at the right age for marriage, and Margaret is searching for a suitable bride-groom for her - educated, dark skinned teetotaler, settled in Bharat perhaps?

Harry is the last son, and is the brightest of the household. Still in college, he aims at pursuing higher studies in Bharat, and applies for the Tamil Language tests so he could take up the course of his liking in the south of India. He is in a relationship with a Muslim girl.

Does this alternate reality have an ordinary life planned for these five people or is it going to turn it into an unexpected roller coaster ride?

Set in an imaginary British village dubbed Mayfield, this book explores the lives of an ideal middle class British family, through all their happiness and heartbreaks. The Britain in this alternate world suffers from poverty, filth, corruption, stench and dishonesty, whereas India is technologically advanced and everything around the world, ranging from machines, beliefs, food, attire and architecture have an Indian flavor to it.

How INDIAN has the world become? Do the British women of the "Yorkshire Biryani" wear the Bindi and decorate their hair with jasmine flowers? Do the men wear turbans and the cross- thread across their chests? Do they worship a plethora of Gods? What is the official language of the world? How has the arts and architecture developed? Has Islam taken a softer route because of the world Hindu domination? What food do the people eat? Do they drink as much tea?

Meanwhile How developed is India? How colourful has it become? Is there a version of the internet? If so, what language does the internet use? Is there a Bollywood? Is there still a split between the north and the south? What does technology look like if all of them had an Indian touch to it. What is the main stream of medicine? What are the most famous sports?

Doctor Who: The New Series: The Churchill Years by various 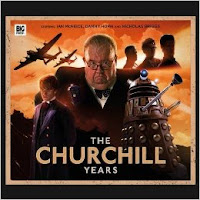 In this four-hour saga, Winston relates a number of encounters with the Ninth, Tenth and Eleventh Doctors in his memoirs, battling alien incursions, metamorphosing creatures...and a Dalek! 1.THE ONCOMING STORM by Phil Mulryne. The War is raging over Europe, and Churchill is desperate for any advantage. A mysterious stone may hold the key to victory - but can the Ninth Doctor stop it from falling into the wrong hands? 2. HOUNDED by Alan Barnes. Churchill is plagued by a creature from his own psyche, which he calls 'the Black Dog'. The Tenth Doctor may be the Prime Minister's only hope - but the Time Lord finds himself imprisoned by a conspiring government agency...3. LIVING HISTORY by Justin Richards. Churchill joins the Eleventh Doctor and Kazran Sardick for a trip to Roman Britain. Julius Caesar's legions are clashing with the ancient Britons. But a far more powerful enemy is planning a war of its own. The Bronze God is about to leave it's temple...4. THE CHARTWELL METAMORPHOSIS by Ken Bentley. Comfortably retired, Churchill plans to live out his days in peace. But an alien incursion launches the Prime Minister back into action and it will take everything he's learnt to win the day. Can Lily Arwell offer her assistance? Winston Churchill first encountered the Doctor on TV in Victory of the Daleks, the two men clearly old friends who had shared past adventures - now Big Finish get to show those moments! Ian McNeice reprises his Churchill role from TV's Doctor Who, but he's also very familiar from roles in such shows as Doc Martin, Children of Dune, and Stay Lucky. Danny Horn and Holly Earl return to previous Doctor Who roles, that of Kazran Sardick and Lily Arwell from two highly rated Doctor Who Christmas specials. CAST: Ian McNeice (Winston Churchill), Danny Horn (Kazran Sardick), Holly Earl (Lily Arwell), Emily Atack (Hetty Warner), Michael Gould (Frederick Lindemann), Derek Riddell (Lt-Commander Sandy McNish), Phil Mulryne (Able Seaman Phillips), Jo Stone-Fewings (Major Wheatley), Amerjit Deu (The Swami), Stewart Scudamore (Danvers), Alistair Petrie (Julius Caesar), Laura Rogers (Queen Tristahna), John Banks (Mr Rogers) and Nicholas Briggs (The Dalek).