Flag Friday: Flag of the United Kingdom of Great Britain, Northern Ireland, and Japan by Reesetelford9 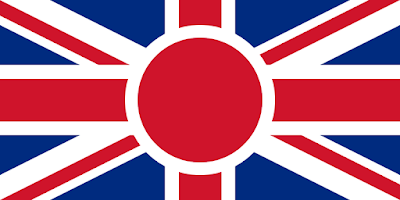 This is the "Flag of United Kingdom of Great Britain, Northern Ireland, and Japan" by Reesetelford9. It is a relatively simple design. Just the red sun in the center of the Union Jack. The fun thing about the Union Jack, however, is that it combines elements from the flags of three other nations: England (the red cross of St George), Scotland (the white saltire of St Andrew) and Ireland (the red saltire of St Patrick). Thus for the red sun of Japan to be there, Britain must have annexed Japan at some point and brought it into union with the rest of Britain.

How did this happen? Most likely with the help of alien space bats, but probably at some point the British got rid of the Japanese emperor and gave the title to one of their monarchs. The Japanese people assimilated (and the British adopted many Japanese customs) and despite the racial barriers, Japan decided a closer union with Britain was better then leaving it (unlike most of Ireland since Reesetelford9 references Northern Ireland in the name of the flag).

Nevertheless, if you still think the addition of Japan to the United Kingdom is implausible, just see what The Onion did to the Georgia state flag.